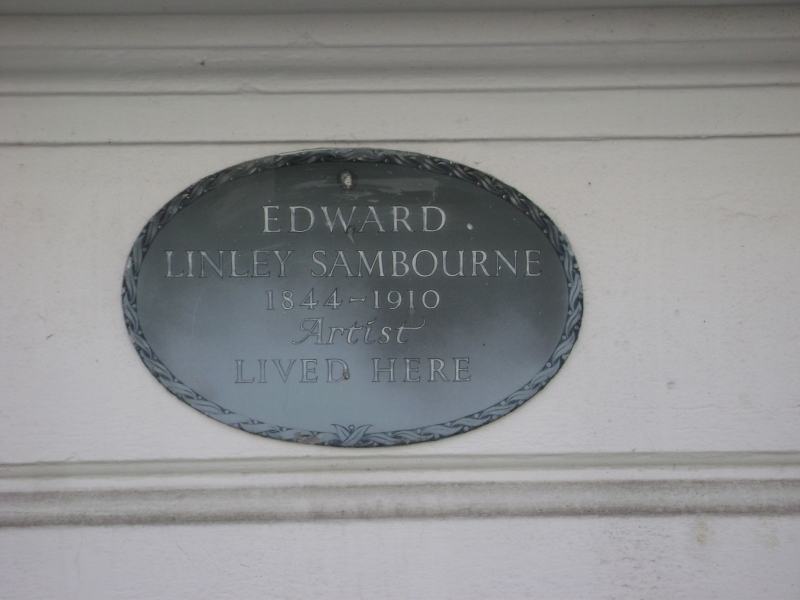 MATERIALS: stock brick and stucco with a slated mansard roof.

PLAN: a mid-terrace townhouse of three-storeys plus basement and attic. The basic plan is the same on each floor, with the hall and staircase to the left and the principal rooms to the right. The basement contains the former service rooms (kitchen, wine cellar and pantry), with a rear passage leading to the garden. On the raised ground floor are the dining room (front) and morning room (back) – the latter, like the room above, extended outwards by about three feet in 1875. The first floor was opened up prior to the Sambournes’ arrival to create a single front-to-back drawing room. On the second floor are the two main bedrooms and a bathroom. The attic contains Linley Sambourne’s studio and a maid’s bedroom.

EXTERIOR: Stafford Terrace is a street of big mid-Victorian townhouses, brick-built with much Italianate stucco trim to the street elevation. No. 18, like its neighbours, is of two unequal bays, with the narrower bay to the left containing the entrance. This is raised up a short flight of steps flanked by urns, and set within a porch with channelled rustication, Doric half-columns, dentil cornice and balustrade. To the right, a polygonal bay window – with similar rustication, cornices and balustrade – rises from the basement through to the first floor. To the ground floor (dining room) window is attached a large fern case, and a smaller fern case adorns the pedimented first-floor window above the entrance. The façade is crowned by a rich cornice (wave-scrolls and dentils) and balustrade. In the attic above are segmental-headed dormers.

The rear elevation, which overlooks the small back yard, is plain, with only a simple balustrade by way of ornament. It bears the marks of various phases of alteration. The large leaded mullion-and-transom windows on the left belong to the Sambournes’ rear extension of 1875. On the right, above the flight of steps leading down from the hall door, is a glazed ‘water feature’ (also of 1875), and above this is the bathroom extension added by the Countess of Rosse in the 1960s.

INTERIORS: the principal rooms were opulently furnished and decorated by Linley Sambourne according to the ‘Aesthetic’ taste of the late C19. Patterned papers, mainly by Morris & Co., were hung on walls and ceilings, and the existing plasterwork, fireplaces, skirtings etc painted in rich greens and golds. The décor was gradually renewed during Linley’s ownership, with the original Morris papers giving way to more expensive embossed hangings; in some rooms the two phases survive side by side. Some of the wallpapers were renewed in 1912, and others were replaced by the Countess of Rosse in the 1960s and 70s.

The following account describes only the main features of the principal rooms, and includes only fixed items. The great quantities of loose furniture, paintings, drawings, photographs and objets d’art, while they make no less a contribution to the character of the interiors, are not covered by the listing.

BASEMENT ROOMS: these rooms, once the kitchen, wine cellar and pantry, have been very much altered; one surviving feature is the row of service bells in the side corridor.

ENTRANCE HALL and STAIR: a small draught lobby opens into the main hall, which has a mosaic tiled floor and wallpaper by Cole & Son (the latter put up in the 1960s). The skirtings are marbled, and the dado bears a painted Greek key design. The stone stairs have an ornamental cast-iron balustrade and scrolled hardwood handrail. To the rear is a small lavatory with built-in cupboards and a tip-up basin. The first-floor landing has stained glass with Linley and Marion Sambourne’s joint monogram (LMS), and below it a small fountain in a glazed recess.

DINING ROOM: the main wallpaper is a modified Morris ‘Pomegranate’ design installed in the 1960s; the frieze area above (behind the plate rail) and ceiling retain the gilded and embossed papers installed in the 1870s and 80s. The bay window contains stained-glass panels depicting Ariel and Titania. The hall door has elaborate cutwork fingerplates, and its panels bear painted palm-tree designs by Linley himself.

MORNING ROOM: this room, Marion Sambourne’s special preserve, is the only one to retain all its original Morris wallpaper: ‘Diaper’ above the plate rail and ‘Pomegranate’ below. The door panels are painted with a design of foxgloves and butterflies. The rear part of this room, like that of the drawing room above, was extended outwards in 1875 to create a shallow curtained alcove; the back wall is almost all window, with heraldic escutcheons including Linley Sambourne’s own (self-devised) arms in stained glass.

DRAWING ROOM: this large room runs the full depth – and at the front the full width – of the house, and is the most opulently decorated and furnished of all the interiors. The walls were at first papered with Morris ‘Larkspur’ design; around 1884 this was overlaid with the present gilded and embossed paper, although this expensive material was only used where the wall face was exposed, so that the original paper can still be seen behind the pictures. The door has embossed brass panels bearing the Sambourne arms. There are two large marble fireplaces with rich scroll-brackets. The rear extension here originally served as Linley’s studio, before he moved his activities to the attic; the window here has stained glass depicting birds and palm-fronds in the outer lights.

PRINCIPAL BEDROOM: this room, Linley and Marion’s bedroom, was redecorated and refitted by Maples in 1887; the Japanese paper that lined the main walls was in turn replaced with the present Morris ‘Norwich’ design in the 1960s, but the rest of the scheme survives. It includes a large chimneypiece with blue and white tiles around the grate, a fitted wardrobe in gilded and ebonised wood, a big marble washstand and a Neoclassical lincrusta frieze.

SPARE BEDROOM: this room, which was Roy Sambourne’s bedroom for much of his life, is hung with embossed and painted wallpaper (installed in 1899), and contains a small blue-and-white tiled fireplace and a marble washstand. The upper window light contains stained glass showing birds against a sunburst.

BATHROOM: this room was extended and refitted in the 1960s; the present fittings mostly date from the 1980s restoration, although the original marble-lined bath – later used to develop photographs, with a folding ledge installed for this purpose – still survives.

STUDIO: this was originally the night nursery, and later Maud Sambourne’s studio and sitting room. In 1899 Linley moved his studio out of the drawing-room recess and fitted this room up for the purpose, installing the present bookshelves and overmantel and hanging embossed paper; the latter, removed in the 1960s, has now been restored.

MAID’S ROOM: the small fireplace with its simple timber surround is original; the Morris ‘Willow’ paper was put up in the 1960s. There are more service bells in the hallway outside this room.

The Phillimore Estate, to the north of Kensington High Street, began to be laid out for housing in the late C18, but the bulk of the land was developed after 1855 by the builder Joseph Gordon Davis. Stafford Terrace itself was built in 1868. The first occupant of No. 18 was a Mrs Elizabeth Bentley, who lived there from 1871 until her death two years later. In 1875 the lease was purchased by the cartoonist Edward Linley Sambourne and his wife Marion, whose parents contributed half the £2000 purchase price as part of the marriage settlement. Before moving in, the Sambournes arranged for the house to be decorated in the fashionable ‘aesthetic’ style of the day, popularised by publications such as Charles Eastlake’s Hints on Household Taste (1868), and familiar to Linley via the houses of successful artist friends such as Luke Fildes and Colin Hunter. Over the next 35 years he gradually embellished the house, renewing the original Morris wallpapers with richer embossed and painted designs, and acquiring ever-greater quantities of furniture and objets d’art. The house and its collection were celebrated during his own lifetime; in 1893 he told an interviewer: ‘What you see is the very best. That has been my principle throughout: not to buy anything that was not really good. But it has taken time to accumulate. There has not been an unlimited exchequer to draw upon.’

On Marion’s death in 1914 the house was inherited by their son Roy, who lived there until his death in 1946. It then passed to Roy’s sister Maud, and thence in 1960 to her daughter Anne, Countess of Rosse, who had been using it for some time as her London base. Lady Rosse was a pioneer of the revival of interest in Victorian architecture and design during the post-war years, and it was here in February 1958 that the founding charter of the Victorian Society was signed by John Betjeman, Nikolaus Pevsner, Hugh Casson and others. In 1980 the house, having been acquired with its contents by the Greater London Council, was opened to the public as a museum; ownership passed to the Royal Borough of Kensington and Chelsea in 1989, and a major restoration programme took place in 1999-2003.

Edward Linley Sambourne (1844-1910) was born in Clerkenwell, London, the son of a fur importer. In 1861, after a brief period at the South Kensington School of Art, he entered the marine engineering firm of Messrs John Penn & Son as an apprentice draughtsman. His early talent for illustration, encouraged by his aunt, the watercolourist Mrs Barr, bore fruit in 1867 when his drawings began to appear in Punch, and for the next four years he worked as a freelance illustrator for the magazine before being taken on as junior cartoonist to Sir John Tenniel in 1871. In 1874, having inherited a private income from Mrs Barr, he married Mary Ann (Marion) Herapath (1851-1914), the daughter of a wealthy stockbroker, with whom he had two children: Mawdley (Roy) (1878-1946) and Maud (1875-1960) - the latter also an illustrator. Alongside his forty-three years’ association with Punch – he was eventually appointed ‘First Cartoon’ in 1901 – he also worked as a book illustrator, and (partly as a means of recording costumes and poses for his cartoons) acquired an interest in photography, becoming a member of the Camera Club in 1893. He died at home in 1910, and was cremated and buried at St-Peters-in-Thanet, Kent.

Linley Sambourne House is listed at Grade II* for the following principal reasons:

* Historic interest: the family home and studio of the leading cartoonist and illustrator Edward Linley Sambourne, and later of his granddaughter Lady Rosse, in whose hands the house became a crucible for the revival of Victorian taste in the 1950s and 60s;
* Interiors: contains a series of lavish and well-preserved 'Aesthetic' interiors created by Linley Sambourne and modified by later generations of the family, with wallpapers by Morris & Co. and Maples along with painted woodwork and plasterwork, stained glass and other fittings;
* Architectural interest: an imposing and little-altered mid-Victorian town house with rare surviving embellishments such as fern cases and an external 'water feature';
* Group value: with the other listed houses of Stafford Terrace.