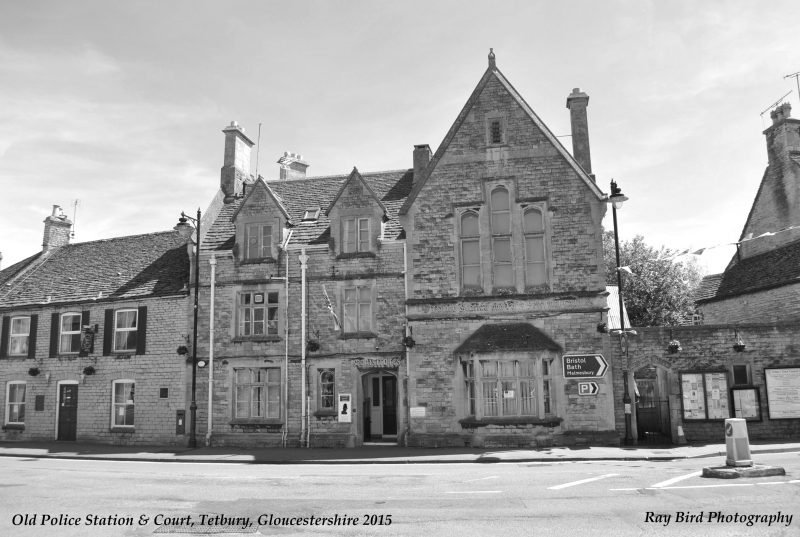 Former police station and petty sessional court, now (2013) known as Tetbury Council Offices and Police Museum. Built in 1883-4 to the designs of James Medland, in the Tudor Gothic style.

MATERIALS: constructed of coursed, rock-faced, Cotswold limestone with ashlar dressings. It has a Cotswold stone slate roof and stone chimneys.

PLAN: a T-shaped plan. The former police station is located to the left-hand range, with further police accommodation to the upper floors. To the right-hand range, which forms a cross-wing, is the former guard’s room and three cells to the ground floor, with the double-height magistrate's court above.

EXTERIOR: the gabled, two and a half storey street frontage (west) is arranged as two: one bays, with a single-storey wall to the right. The ground floor of the two-bay block to the left has a three-light cross window, a single-light window and a four-centred arched doorway with hollowed reveals and a wrought-iron gate. The doorway carries the date ‘1884’ to the spandrels with raised stone Gothic lettering ‘magistrates’ above, and decorative foliate carving to either end. There is a three-light and a two-light cross window to the first floor and a pair of two-light mullion windows within gabled dormers to the attic floor. There is a moulded string course to the top of the ground and first-floor levels. The bay to the right breaks forwards and its ground floor has a five-light mullion and transom bay window with Cotswold stone banded roof. The moulded plat band above includes raised stone Gothic lettering: ‘Police Station and Petty Sessional Court’, with decorative foliate carving to either end. To the first floor a tall, three-light, stepped window with recessed spandrels lights the former courtroom. To the apex of the gabled roof is a single-light window with louvres. To the left of this bay is a coped, single-storey wall with a four-centred arched doorway to the left, with raised stone Gothic lettering: ‘Public Entry’ above, with decorative foliate carving to either end. To the right is a single-light louvered window in a chamfered recess. The side (south) elevation comprises a four-centred arched doorway with the raised stone Gothic lettering: ‘Guard Room’ above, with decorative foliate carving to either end, and the external staircase providing public access to the courtroom. To the left-hand end is a tall lateral stone stack. The rear elevation is arranged one: two bays. The left-hand bay comprises three cell windows at ground floor, and a stepped, three-light window to the first floor with louvered window above to the apex of the gabled roof. To the right-hand, two-bay block is an arched doorway with keystone and mullion windows of various sizes. There is a single-storey brick extension to the far right-hand bay. The north elevation abuts the neighbouring building and has a gable-end stack.

INTERIOR: internally the plan form survives well and the building retains many historic fixtures and fittings including moulded architraves and skirting boards, geometric floor tiles to the hall and porch, panelled doors and three cells. The courtroom retains the magistrate’s raised bench with recessed panels, a fireplace to the side wall, and a doorway to the magistrate’s retiring room - the fittings in this room have been removed. To the opposite sides of the courtroom is the raised dock and witness stand. The vertical wall panelling to dado height is extant but the public gallery has been removed. The arch-braced roof is supported on stone corbels.

Following the Municipal Corporations Act of 1835, purpose-built combined police stations and petty sessions courts began to be constructed. The most comprehensive programme of building occurred in Gloucestershire where sixteen were built between 1858 and 1909. The building programme was initiated by the County Surveyor, James Medland and the Police Station and Petty Sessional Court at Tetbury was built, to his designs, in 1883-4.

In 1969 the Tetbury Magistrates Court was moved to Cirencester, and by 1974 the police force had relocated to a new building. In 1979 the building came into the ownership of Tetbury Town Council and is used as office accommodation and a museum. The police have recently resumed an office base within the building, located in the former magistrate’s retiring room.

The former police station and petty sessional court, now known as Tetbury Council Offices and Police Museum, built in 1883-4 to the designs of James Medland, is listed at Grade II for the following principal reasons:
* Architectural interest: a well-preserved example of a purpose-built combined police station and petty sessional court by County Surveyor, James Medland, which demonstrates good compositional design with attention to detail;
* Function and planning: the function and plan form of the building is clearly expressed in its external elevations and is carried through to the internal layout which is unaltered;
* Fixtures and fittings: there is a good survival of fixtures and fittings, particularly to the courtroom which, despite the removal of the public gallery, retains its magistrate’s bench, dock and witness stand.