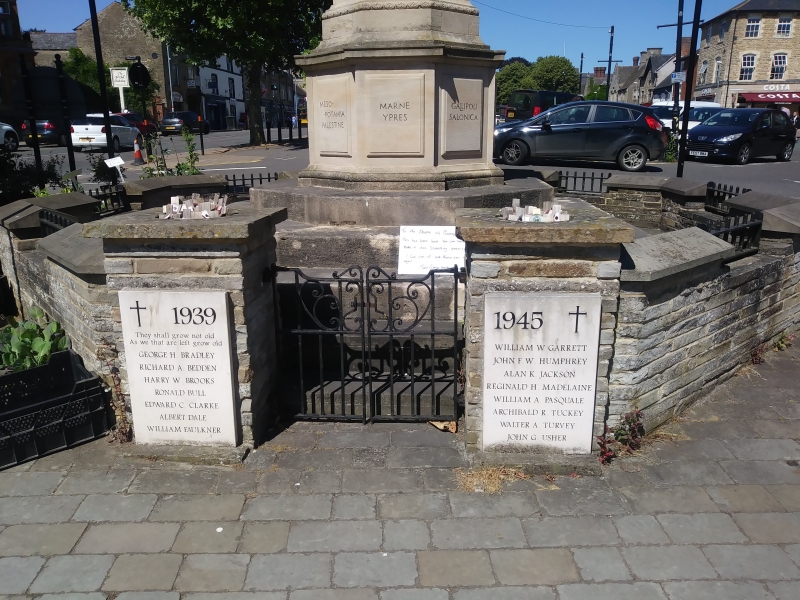 The memorial stands in the south-west part of Brackley’s long Market Place, in a pedestrianized area in front of the Grade II*-listed Town Hall. Of Clipsham limestone, it comprises a three-stepped octagonal base surmounted by a c6 m high, three-tiered, octagonal column, each face slightly concave, surmounted by a cross. The lowest tier carries the names of the theatres of war and the great battles. The 68 names of the fallen from the First World War are recorded in the middle tier. The principal dedication, inscribed on a plaque on the upper part of the middle tier, reads TO THE MEN OF/ BRACKLEY/ WHO GAVE THEIR/ LIVES FOR KING/ AND COUNTRY/ IN THE GREAT WAR/ 1914-1919. Above the plaque, in a decorative cartouche, are the arms of Brackley.

The memorial is surrounded by a recent (c2006) low wall. Either side of iron gates, plaques record the 15 names of those lost in the Second World War. On the wall coping to the side of the gates is inscribed the name of a serviceman killed in Afghanistan in 2009.

This List entry has been amended to add the source for War Memorials Online. This source was not used in the compilation of this List entry but is added here as a guide for further reading, 17 January 2017.

Brackley War Memorial, in the town's central Market Place, is listed at Grade II for the following principal reasons:
* Historic interest: as an eloquent witness to the tragic impact of world events on the local community, and the sacrifice it made in the conflicts of the C20;
* Design: an ambitious and slightly unusual design, whose scale befits its prominent place in the town’s Market Place;
* Group value: with various listed buildings around the Market Place, including the Town Hall (Grade II*).