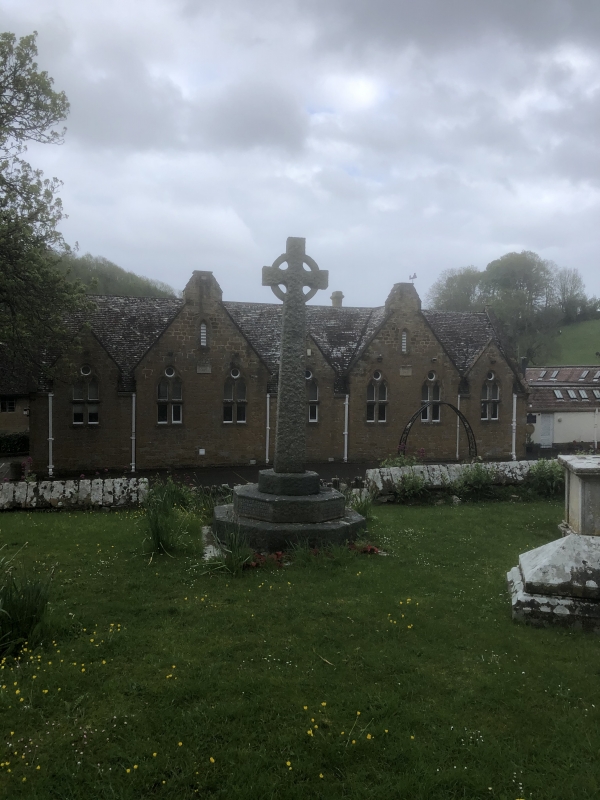 DESCRIPTION: the war memorial stands in the churchyard of the church of St John the Baptist, near the centre of Symondsbury, and faces south. It is immediately south of the Grade I listed medieval church and north of the Grade II listed late C19 Church of England primary school. The memorial comprises a rough-hewn granite cross with Celtic head, enriched by raised interlace and knotwork, upon on a tapering shaft c2.5m high that rises from a three-tier stepped octagonal plinth 0.7m high. In the centre of the cross is the Chi-Rho symbol; a monogram abbreviating the name of Jesus Christ. The front of the middle step of the plinth is inscribed IN REMEMBRANCE/ OF SYMONDSBURY MEN/ WHO FELL IN/ THE GREAT WAR/ 1914-1918. On six sides 28 names are inscribed. The front of the lower step is inscribed 1939-1945/ (NAMES), with five names of the Fallen. The memorial is set in a square concrete foundation.

The aftermath of the First World War saw a huge wave of public commemoration with tens of thousands of memorials erected across the country. One such memorial was erected in c1920 to commemorate 28 residents of Symondsbury who died during the conflict. A further inscription was added to the memorial following the Second World War, to commemorate five residents who lost their lives during that conflict.

Symondsbury war memorial, which stands in the churchyard of the church of St John the Baptist, is listed at Grade II for the following principal reasons:
* Historic interest: as an eloquent witness to the tragic impact of world events on the local community, and the sacrifice it made in the conflicts of the C20;
* Design: an elegant Celtic cross enriched by raised interlace and knotwork, and bearing the Chi-Rho symbol, set on a shaft rising from a stepped octagonal plinth;
* Group value: with the Grade I listed church of St John the Baptist and the Grade II listed Symondsbury Church of England Primary School.