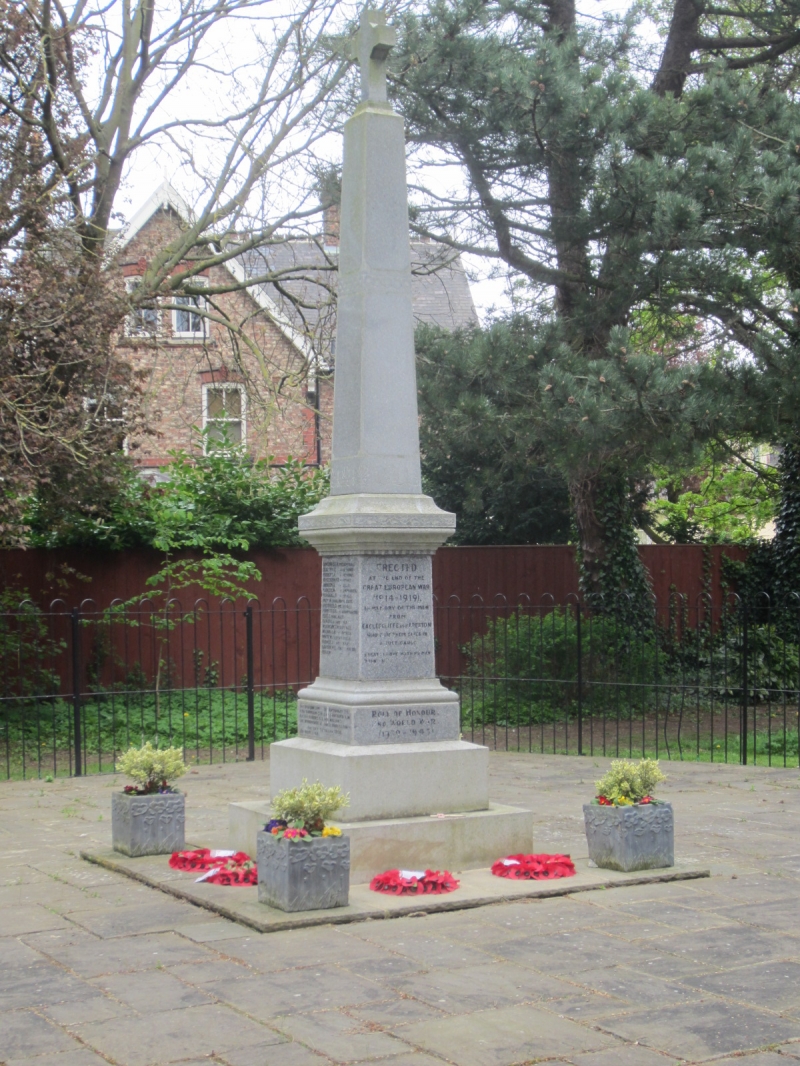 The memorial stands at the centre of Tittybottle Park. Built in grey Aberdeen granite, c 5m tall overall, it comprises a small blind wheel-head cross on top of a tapering shaft. The shaft rises from the cornice of the slightly tapering pedestal. The moulded pedestal base stands on two steps. The highly polished granite cross shaft is delicately ornamented with engraved patterns outlining the edges, acanthus leaves around the base of the shaft, and with patterning around the shaft foot.

The principal dedicatory inscription on the front face of the pedestal reads ERECTED/ AT THE END OF THE/ GREAT EUROPEAN WAR/ (1914 – 1919)/ IN MEMORY OF THE MEN/ FROM/ EAGLESCLIFFE AND PRESTON/ WHO GAVE THEIR LIVES IN A/ JUST CAUSE./ GREATER LOVE HATH NO MAN/ THAN THIS. The commemorated First World War names are listed on the two side faces of the pedestal. The rear face is inscribed TO LIVE IN HEARTS WE LEAVE/ BEHIND IS NOT TO DIE.

The front face of the pedestal’s base is inscribed ROLL OF HONOUR/ 2ND WORLD WAR/ (1939 – 1945) with names to either side. The soldier who died in 1950 is commemorated below the Second World War list on the left hand side.

This List entry has been amended to add the source for War Memorials Online. This source was not used in the compilation of this List entry but is added here as a guide for further reading, 7 February 2017.

Eaglescliffe and Preston-on-Tees War Memorial was unveiled on 25 September 1920 by Colonel G O Spence, 5th Battalion, Durham Light Infantry. It was dedicated by Reverend B Harvey in commemoration of 38 local servicemen who died during the First World War. The memorial cost £1,027, raised by public subscription. Following the Second World War the names of 20 men and one woman were added. One serviceman who died in 1950 during the Malayan Emergency is also commemorated.

Eaglescliffe and Preston-on-Tees War Memorial, which stands in Tittybottle Park, is listed at Grade II for the following principal reasons:
* Historic interest: as an eloquent witness to the tragic impact of world events on this local community, and the sacrifice it has made in the conflicts of the C20;
* Architectural interest: an elegant memorial obelisk.