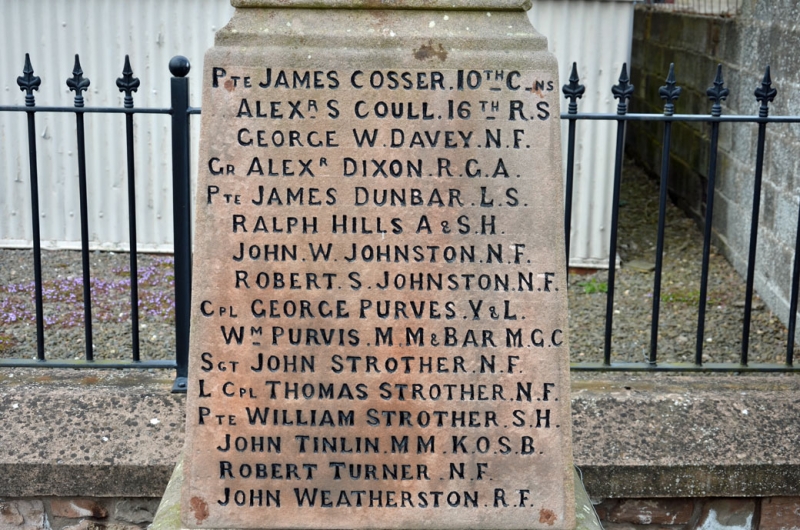 The tall Red Doddington sandstone memorial stands outside Berwick United Reformed Church (not listed) on Main Street, Horncliffe. It takes the form of a cross in the early medieval style, the front surface of which is carved in elaborate interlace patterns. To the foot of the cross shaft the principal dedicatory inscription reads IN/ PROUD AND/ LOVING/ MEMORY OF/ THE MEN OF/ HORNCLIFFE/ AND DISTRICT/ WHO GAVE/ THEIR LIVES/ IN THE/ GREAT WAR/ 1914-1918.

The cross shaft rises from a tapering plinth that has a moulded foot and which stands on a stone step with a concrete base. The inscription on the front face of the plinth bears the 16 names of the fallen from the First World War. The foot of the plinth carries the quotation “GREATER LOVE/ HATH NO MAN THAN THIS/ THAT A MAN LAY DOWN HIS/ LIFE FOR HIS FRIENDS.” with below on the riser of the step 1939 – 1945/ (1 NAME).

The aftermath of the First World War saw the biggest single wave of public commemoration ever with tens of thousands of memorials erected across England. This was the result of both the huge impact on communities of the loss of three quarters of a million British lives, and also the official policy of not repatriating the dead, which meant that the memorials provided the main focus of the grief felt at this great loss. One such memorial was raised at Horncliffe as a permanent testament to the sacrifice made by the members of the local community who lost their lives in the First World War.

The memorial was unveiled on 19 September 1920 by Field Marshall Viscount Allenby and dedicated by Reverend WW Charlton (Allenby’s brother lived locally and the Field Marshal was visiting the district on holiday). The memorial commemorates 16 local servicemen who died in the First World War. It was provided by J and J Young of Norham, whilst Mr G Purves of Horncliffe laid the concrete base. The memorial was funded by public subscription. Following the Second World War the name of one man who died in that conflict was added.

The memorial stood immediately outside the Presbyterian Church (not listed) on Main Street. This was sold in 2003 and in 2004 the memorial was moved circa 10m along the road to stand outside the United Reformed Church.

The inscribed names on the plinth had been covered by a metal plate on which the details were repeated. In early 2016 this plate was refurbished and removed. The original names underneath were re-cut and re-painted. The dedicatory inscription was also re-furbished and the cross head, that had developed cracks and was unsafe, was replaced (carved by Mike Viaena of Roluna Stone). These works were funded by Berwick Preservation Trust.

Horncliffe War Memorial, which stands on Main Street, is listed at Grade II for the following principal reasons:
* Historic interest: as an eloquent witness to the tragic impact of world events on the local community and the sacrifice it made in the conflicts of the C20;
* Architectural interest: a richly ornamented cross in the early medieval style.