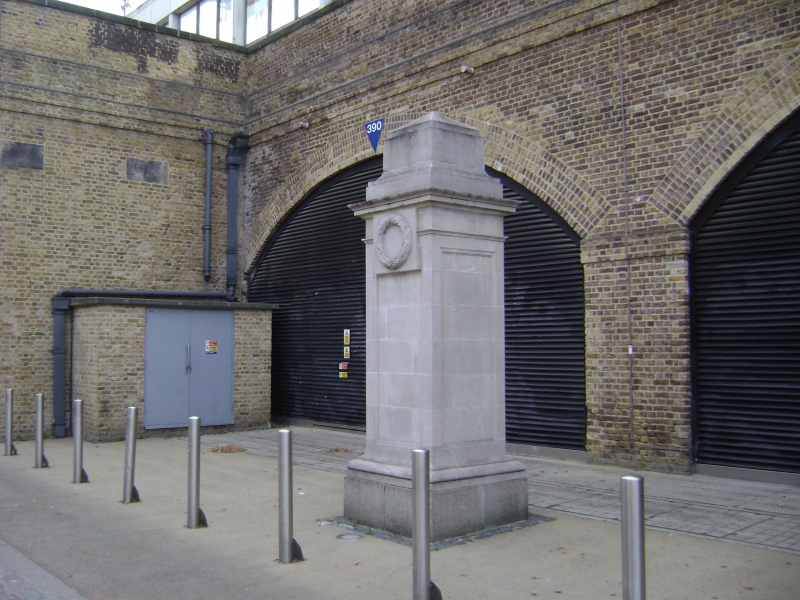 War memorial in the form of a cenotaph-like column. It commemorates those North London Railwaymen who died during the First World War.

Cenotaph-like column, made of Hopton Wood stone, standing atop a granite base and tapering slightly to a cornice. The front face of the memorial bears a relief of a laurel wreath, with the inscription below: IN MEMORY OF / NORTH LONDON / RAILWAYMEN / WHO FELL IN / THE GREAT WAR / 1914 - 1919. The other three faces bear the names of the Fallen.

The aftermath of the First World War saw the biggest single wave of public commemoration ever with tens of thousands of memorials erected across the country. One such memorial was raised in honour of those employees of the North London Railway (NLR) who fell in that conflict. The memorial was designed by Reginald Wynn Owen, architectural assistant with the Civil Engineer’s Office, at a cost of £501-130-0. It was unveiled at Broad Street railway station on the 10 February 1921 by A Holland-Hibbert, Chairman of the NLR; also in attendance were various NLR directors and managers, relatives and colleagues of the Fallen, and Reverend GW Hudson Shaw, Rector of the nearby St Botolph-without-Bishopsgate church. Shortly after the unveiling an additional name (H Prickett) was added to the memorial.

Broad Street station, built 1865, was located immediately to the west of Liverpool Street station and was once one of London's busiest rail terminals. Broad Street and its adjacent lines and connecting stations were heavily bombed in the Second World War and this, as well as the subsequent diversion of many of the routes away from the station, saw a steep decline in passenger numbers in the post-war decades. In his 1973 book "London Terminals" John Betjeman commented on the decline of the station, and mentions "the 1914 War Memorial of the North London, a miniature version of the Cenotaph in Whitehall." In 1986 Broad Street station was closed and demolished, to be replaced by the Broadgate development; the war memorial had been put into storage at Richmond station by British Rail on 17 June 1985. It was reinstalled in Richmond station car park on 4 June 1989.

With the re-opening of the East London Line by Transport for London (TFL) in 2010, which uses part of the old North London Line, it was decided to move the memorial to Hoxton Overground station. The memorial was cleaned and unveiled in a re-dedication ceremony held on the 7 June 2011 and attended by the Commissioner of Transport for London Peter Hendy, Reverend James Westcott, Vicar of the nearby St Chad’s Church, representatives from the Royal British Legion and local school children.

The North London Railwaymen War Memorial is listed at Grade II for the following principal reasons:
* Historic interest: as an eloquent witness to the tragic impact of world events on the employees of the North London Railway, and the sacrifices they made in the First World War;
* Architectural interest: as a dignified war memorial in the form of a cenotaph-like column;
* Group value: with the adjacent Grade I-listed Geffrye Museum.