A Grade I Listed Building in Haggerston, Hackney 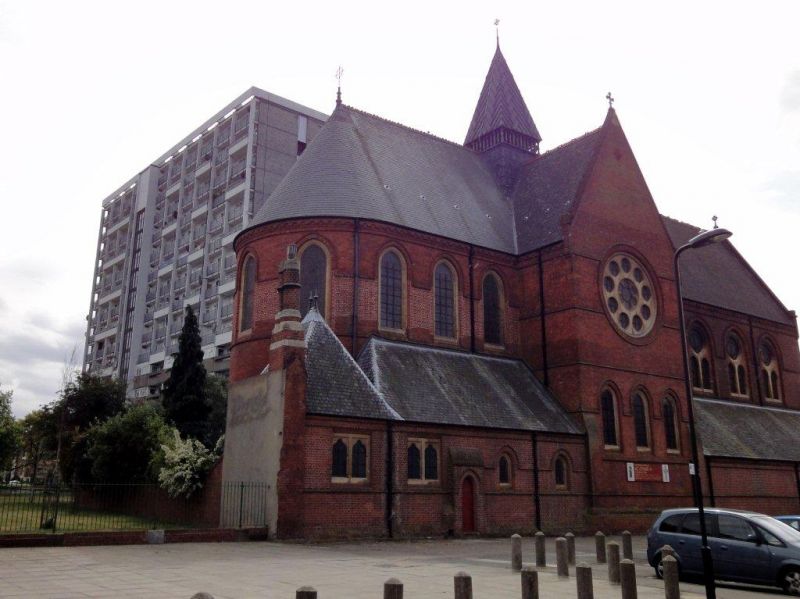 EXTERIOR: This is a brick town church with powerful, simple lines in which detail is pared down. Its inspiration comes from the austere Gothic of the early 13th century and is the first of James Brooks's East End churches to abandon the use of structural polychromy. The juxtaposition of red-brick walling with the cream limestone of the windows nonetheless makes for a striking colour contrast. The E end with its sheer, unbuttressed apse is particularly dramatic. The large, single-light, uncusped windows around the chancel are set high up and rise almost to the frieze of dentil cornice immediately under the eaves. The main apse is mirrored at the lower level by the Lady chapel on the S side. On both sides of the church there are transepts, not extending beyond the line of the aisles, which also form powerful masses. Each has a large circular window, that on the S with eight large cusps, that on the N with plate tracery with a cusped circle in the centre surrounded by nine (an unusual number) of uncusped, punched circles. The nave is of four bays and has large, uncusped clerestory windows consisting of small paired lights with a large circle punched through the head. The sides of the aisles were originally windowless but small windows have been inserted in the NW part of the N aisle while a new entrance has been cut in the S aisle (all this was probably done in the 1970s). At the W end there is a lean-to narthex with three cusped porthole-like windows in its W face. Above there is a pair of windows of the same design as those in the clerestory and in the gable a circular window of similar design to that in the N transept but with seven punched circles round the circle at the core. Over the crossing is a square bell-turret, lean-covered on its base and pyramid spire with alternating timber balusters and square posts in the narrow, open middle part. The overall effect is highly impressive.

INTERIOR: The bare red brick of the exterior is repeated internally and contrasts with the limestone of the piers etc, some of which has been painted white. The four bays of the clerestory seen externally are represented internally at first floor level by just three wide arches to the arcades (hence the middle pair of clerestory windows sit either side of the apex of the middle bay of the arcade). The piers are large and circular and stand on square bases. Their capitals, like many other capitals in the W parts of the church, remain uncarved which forms a feature that unintentionally increases the sense of strength and solidity of the building. The arches to the transepts are much taller than their counterparts further W and have tall shafts to the responds. The chancel arch is taller still and almost occupies the full width of the nave. The head of this arch is moulded and again there are shafted responds. There are two-bay arcades either side of the chancel but here the capitals have been carved with capitals in a style of c1200. The coverings of the nave and chancel are very different. The roof of the nave is a timber tunnel vault with narrow, hoop-like members carrying the main trusses. The chancel on the other hand is vaulted in brick with stone ribs: there are two quadripartite vaults in the two W bays while, over the apse the ribs meet at a central point. The Lady chapel is also vaulted in brick and stone. In the nave aisles the roofs are lean-tos with arch-braces to the main trusses. The floors of the nave, aisles and transepts are largely of plain red tiles, while the chancel has polychromatic and encaustic tiling. The W bay of the nave has been divided off from the rest by a partition to create meeting spaces, a kitchen etc.

PRINCIPAL FIXTURES: At the E end there is a reredos designed by Brooks and carved by Thomas Earp with the central, gabled panel depicting the Crucifixion: it is flanked by two arches with figures on either side. Just above the altar the reredos has a decorative band of quatrefoils. This band has a loose visual link to the arcading and trefoil piercing in the low screen at the entrance to the chancel. This carries a tall, delicate iron screen with very open one-light divisions which is probably to a design by Brooks. Brooks is credited with the pulpit, a polygonal timber piece with pierced trefoils in the sides, and standing on a stone base. The pews are movable and are of inverted Y-shape design. The church possesses an item important to the history of Anglo-Catholicism in the confessional used by Fr Alexander Mackonochie, the ritualist priest at St Alban, Holborn: it came here via the nearby Priory of St Saviour. The font is a bold, simple piece of polished limestone with a plain circular bowl set on a central drum with surrounding shafts

SUBSIDIARY FEATURES: S of the church is St Chad's vicarage of 1873-4, also of brick and designed by James Brooks (it is separately designated at II*).

HISTORY: This is one of several churches by James Brooks built for the Haggerston Church Scheme and is the only one remaining in use by the Church of England. The foundation stone was laid on 2 February 1868 and it was consecrated on 4 April 1869. The surroundings have changed enormously since that time. It used to tower above the small houses that occupied the area and would have looked the perfect embodiment of the Victorian church serving poor areas - tall, stately and advertising the presence of the Church and its mission. The small houses were swept away in the mid-1960s and the church is now surrounded by tower blocks and maisonettes.

James Brooks (1825-1901) is one of the most respected Victorian church architects. He was born at Wantage in Oxfordshire and was articled to the London architect Lewis Stride from 1847 and commenced independent practice in 1851. His fame developed as he built a series of inner London churches from the early 1860s. These addressed the acutely-felt problem of providing dignified, capacious church accommodation on a modest budget in rapidly expanding, poor suburbs. He became architect to the diocese of Canterbury from 1888 and was joined by his son, James Martin Brooks, as a partner to form James Brooks & Son. St Chad is one of his outstanding works.

REASONS FOR DESIGNATION:
The church of St Chad is designated at Grade I for the following principal reasons:
* It is of outstanding interest as one of the finest inner city churches of the mid-Victorian period and is by one of the greatest architects of the day.
* It is a magnificent response to the urgently-felt need among Anglicans to provide fine places of worship for the poor and which contrasted with the drabness and misery of the local surroundings.
* The external massing, materials, attention to detail are all of outstanding note.
* Internally, it retains important fixtures and fittings from the Victorian period, and it possesses a sense of volume and Gothic strength that are of great accomplishment.
* It has very strong group value with the vicarage.