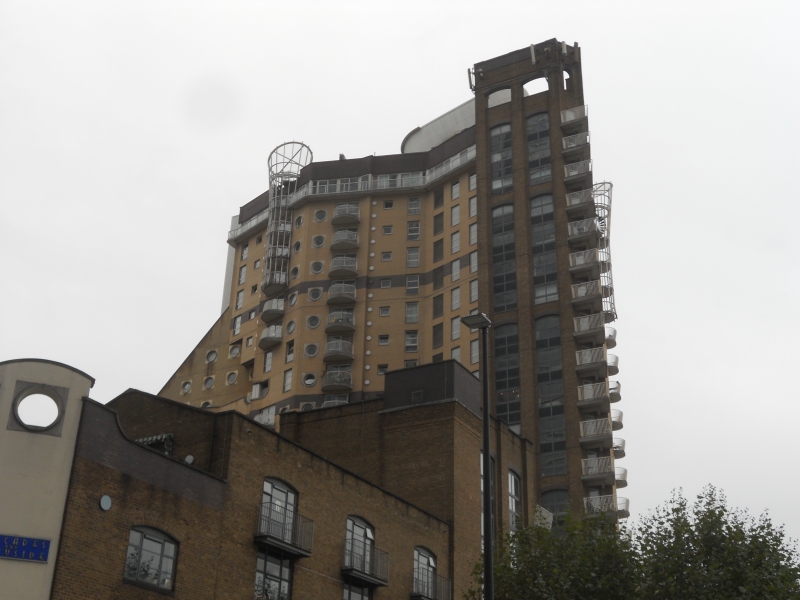 STRUCTURE and MATERIALS: the building is constructed on a reinforced concrete frame, and is clad with facing bricks, pre-cast concrete components and powder-coated aluminium window frames.

PLAN: the building is roughly rectangular on plan, with concertina-angled elevations, maximising views of the river to the west, and the docks to the east.

The footprint of the building recedes northwards with each successive storey; it is 20 storeys at the north, and slopes down to two storeys at the southern end.

The entrance and vertical services and circulation are located at the north end, with the fire escape stairs carried down the sloping south side. The block contains 164 single-aspect flats, accessed from a central corridor. The flats vary in size from one to three bedrooms and each has a balcony, and those facing south have a sun terrace and conservatory. The angled elevations create differently proportioned rooms with each flat, due to the gradual change in depth.

EXTERIOR: the exterior is dominated by the building’s sloping profile and facetted plan, onto which are layered banded brickwork, balconies and windows of various sizes and proportions. Nautical imagery such as porthole windows, crows’ nests and funnels allude to its Docklands setting. The lowest four storeys are detailed in blue engineering bricks, with stepped projections in London stock bricks with segmental arches, a reference to C19 Docklands warehouses. These elements are alternated with semi-circular balcony turrets of white-rendered concrete. The storeys above are detailed in buff facing bricks with a strip of blue bricks marking every fourth storey. The northern service core is detailed in contrasting brown brickwork.

The sloping south elevation has stepped conservatories in brick with aluminium window frames and a central fire escape stair with white rendered concrete walls and pitched steel canopy. The upper four storeys rise vertically, and have funnel-like frameworks affixed to three corners; these were intended to be glazed, though budget did not allow. On the roof, an angled white structure resembling a steamship’s smoke stack contains the lift motor. The two-storey projection to the south contains a swimming pool, spa and conference room, and has three white flues at the south end.

INTERIORS: the brickwork surrounding the main front doors continues into the lobby, where it contrasts with smooth, sleek finishes and fixtures. The walls are plastered and painted white, and the floors are covered with cream marble tiles, edged in russet-coloured marble tiles. There is a concierge’s desk with a deep, russet-marble counter, red painted steel frame with smooth timber panelling, terminating in a circular projection. Behind the desk, the office doorway has a jauntily-eared architrave, and there is a timber shelving unit with a pigeon hole for each flat. The lobby has a raised, carpeted lounge to the west, looking onto the river. An Art Deco-style font is used on signage throughout.

Internal doors, generally, have triangular windows, contrasting with the porthole windows looking out. The spinal corridors are plastered and have picture rails and chrome uplighters, and the doorways to each flat have architraves with exaggerated mouldings. The stair to the lobby and the fire escape stair are utilitarian.

There is a swimming pool in the flat-roofed southern projection, lit by a linear glazed lantern, a continuation of the sloped fire-escape stair window. The pool hall is symmetrically laid out: a flight of stairs leads down to a circular jacuzzi inset into the main pool. There are high-level strips of windows along either side, with a curved bottom corner and slanting glazing bars, echoing the angles and shapes of the exterior, and redolent of an ocean liner.

Post-Modernism, a movement and a style prevalent in architecture between about 1975 and 1990, is defined in terms of its relationship with modern architecture. Post-Modernist architecture is characterised by its plurality, engagement with urban context and setting, reference to older architectural traditions and use of metaphor and symbolism. As a formal language it has affinities with mannerism (unexpected exaggeration, distortions of classical scale and proportion) and the spatial sophistication of Baroque architecture. Post-Modernism accepts the technology of industrialised society but expresses it in more diverse ways than the machine imagery of the contemporary High-Tech style.

The origins of the style are found in the United States, notably in the work of Robert Venturi and Charles Moore which combined aspects of their country’s traditions (ranging from the C19 Shingle Style to Las Vegas) with the knowing irony of pop art. A parallel European stream combined an abstracted classicism or a revival of 1930s rationalism with renewed interest in the continental city and its building types. In England, the American and European idioms converged in the late 1970s, to produce works by architects of international significance, including James Stirling, and distinctive voices unique to Britain such as John Outram. The 1980s revival of the British economy was manifested in major urban projects by Terry Farrell and others in London, while practices such as CZWG devised striking imagery for commercial and residential developments, of which Cascades in an example.

The London Docklands Development Corporation (LDDC) was established in 1981 to oversee the development of 8.5 square miles of east London, which became one of the most important pieces of town planning and industrial reclamation of late-C20 Britain. The LDDC was based on the Isle of Dogs, a central and important part of the large redevelopment area. Cascades occupies the former site of the Canal Iron Works, part of Sufferance Wharf, also on the Isle of Dogs, which was purchased in 1985 by the St Albans-based Kentish Homes with planning permission for three- and four-storey houses. They appointed CZWG – Campbell, Zogolovitch, Wilkinson and Gough – whom had designed several low-rise speculative housing schemes in east London for the company. Rex Wilkinson, the CZWG partner in charge of the project, had recently studied waterside developments in Hong Kong, Sydney and San Francisco. His proposal for a 20-storey building was accepted by Kentish Homes and the LDDC, partly on the grounds of the height precedent set by the recent approval of three tall towers at Canary Wharf. All 164 flats were secured with 10% deposits before construction commenced.

Construction began in early 1987, the building contractor being JA Elliott of Bishop’s Stortford. The 78-week contract coincided with the floatation of Kentish Homes on the Stock Exchange, and it was required that the lowest five storeys be fitted out and handed over while the upper storeys were still under construction, following ‘fast track’ construction methods pioneered in north America. Scaffolding at the lower levels was struck while the scaffolding for the upper levels was cantilevered from the structural frame. Prefabricated bathroom ‘pods’ were also dropped in by crane to speed up construction. The first occupants moved in in February 1988, several months prior to the completion of the scheme in August 1988. A system was developed by the architects and engineers to prevent cold-bridging at the junctions of the elevations and balconies, anticipating building regulations, and was the basis for a number of proprietary components now on the market.

CZWG’s design fuses nautical elements with references to industry; Wilkinson was struck by the Dockland’s heavy industry, with its powerful, dynamic forms: a diagonal coal-conveyor at Deptford provided the essential form of the building, described in the RIBA Journal as ‘brooding sphinx-like at the water’s edge’ (1989), while the elevations incorporate ‘imagery … from ocean liners and warehouse buildings fused together as if one had collided with the other’ (Building, 24 October 1986). The architect notes that the design for the building did not entirely abandon the principles of Modernism, where form, in part, is dictated by function, and elements, such as the stair, are clearly expressed. Communal facilities originally included a swimming pool, gymnasium, sauna, and meeting room, reflecting the developer’s aspirations that the block would ‘have the feel of an international hotel’ (Building, 24 October 1986). Cascades was the first high-rise residential development in London’s Docklands and the journal ‘Building’ reported that it was nicknamed ‘Yuppie Towers’ (5 February 1988).

CZWG was formed in London in 1975. The practice’s eclectic, Post-Modern style is underpinned by a consistent design approach, including the use of bold, geometric gestures, engagement with urban context and resourceful use of building materials and technologies. The four founder partners, Nicholas Campbell, Rex Wilkinson, Roger Zogolovitch and Piers Gough studied together at the Architectural Association in London between 1965 and 1971. The practice’s early workload was based on the conversion of older buildings such as Phillips West 2 (1975-1976) and pioneered ‘loft living’ in the UK: the conversion of industrial buildings to live/work units for artists, designers and others. The 1980s regeneration of Docklands brought housing commissions such as China Wharf and the Circle (1987-1979), while the practice’s workload has since diversified to include civic and commercial projects.

Perpendicular to the main block is 1-9 Quayside, a secondary phase of the scheme: a lower block of three and four storeys, comprising four retail units with flats above. To the east is a communal landscaped garden and tennis court, with a basement car park below. These elements are not included in the listing.

Cascades, 1987-1988 by CZWG, is listed at Grade II for the following principal reasons:

* a key work by CZWG, a celebrated British Post-Modernist practice;
* a landmark building on the Isle of Dogs, and an important residential scheme in what was the most important piece of town planning and industrial reclamation of late-C20 Britain, London Docklands.