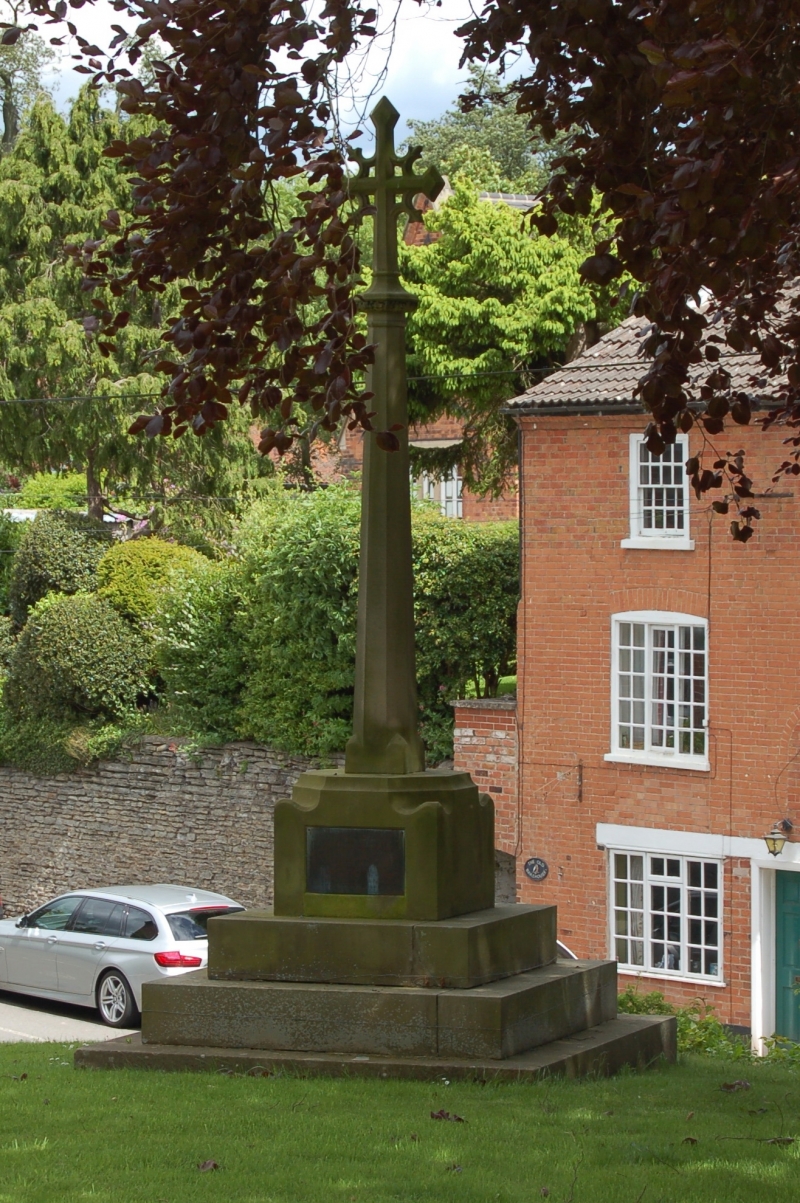 East Bridgford War Memorial is located in the eastern corner of the churchyard in close proximity to the Grade I-listed Church of St Peter and a group of Grade II-listed headstones.

The war memorial is constructed of Derby gritstone and takes the form of a pointed Latin cross with cusped projections at the angles between the cross-arms. The cross crowns an octagonal shaft with decorative moulded collar and a square foot with inverted chamfer stops. The shaft rises from a square plinth with octagonal cap and curved moulded shoulders. This surmounts a three-stepped base, square on plan..

The east face of the plinth has a cross patée symbol carved in relief above an inset bronze plaque carrying the names of the 22 servicemen who died in the First World War. The names are in raised lettering and are listed under the year each man died. Directly below, to the east face of the base, is the principal inscription in incised lettering, TO THE MEMORY OF THE FALLEN IN THE GREAT WAR/ 1914-1918. The step below has the following words incised, THEIR NAME LIVETH FOR EVERMORE.

The west face of the plinth has a further bronze plaque, bearing the Second World War dedication and names. This reads, THIS TABLET WAS ADDED TO THE/ MEMORY OF THE FALLEN IN THE/ SECOND GREAT WAR 1939-45 (5 NAMES). The names are again listed by the year each man died.

One such memorial was raised at East Bridgford as a permanent testament to the sacrifice made by 22 members of the local community who died in the First World War. The memorial was designed by the architect CE Ponting and the building work was carried out by Messrs Ward and Adkins, Nottingham. It was unveiled and dedicated on 27 June 1920 by Archdeacon Conybeare. After the Second World War a dedication and the names of five casualties of that conflict were added to the memorial.

CE Ponting FSA (1850-1932) was based in Marlborough, Wiltshire, and was responsible for the design of numerous buildings including parts of Marlborough College, and buildings ranging from the Cottage Hospital and Institute at Almondsbury (Grade II) to elements of the Grade I-listed Eleanor Cross at Cheshunt. As Surveyor for the Archdeaconries of Wiltshire and Dorset he was involved in many re-orderings and restorations at churches in the Dioceses of Salisbury and of Bristol. Prior to the First World War he supervised the restoration at St Peter’s, East Bridgford, which may have resulted in the commission to design the war memorial cross there. His numerous war memorials include those at Amesbury, Wilton, and Marnhull (all Grade II-listed).

East Bridgford War Memorial Cross, which stands in the churchyard, is listed at Grade II for the following principal reasons: