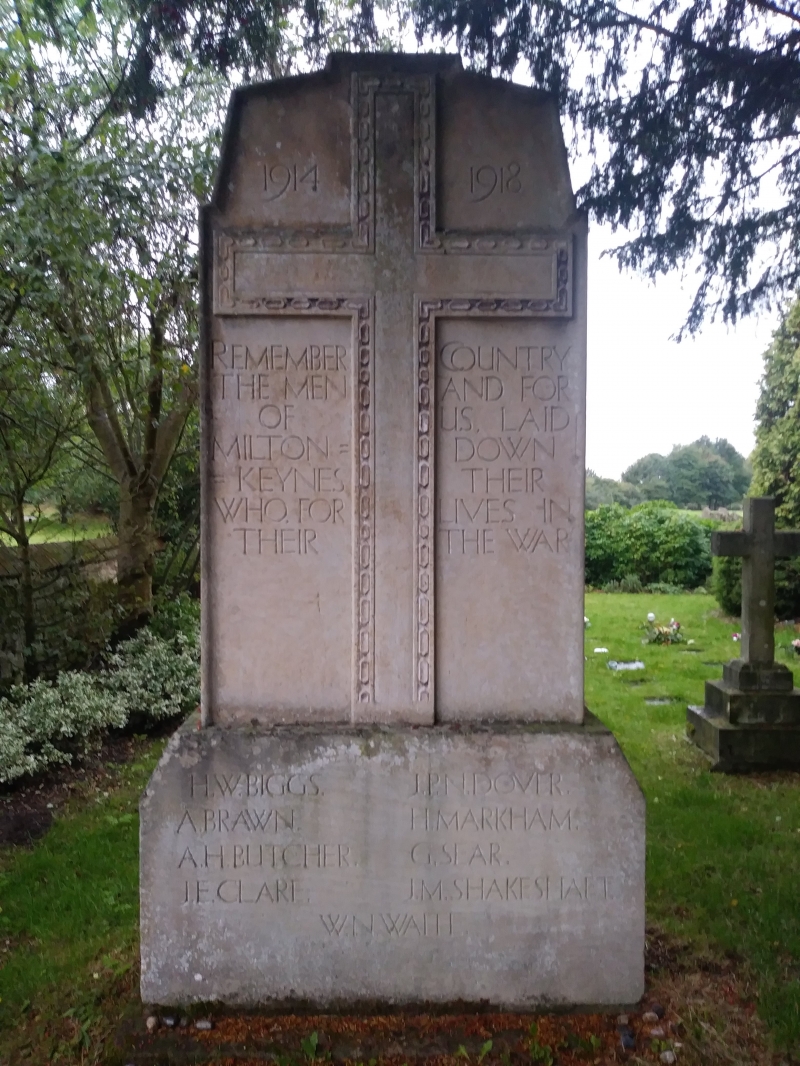 The Portland stone war memorial stands in the churchyard c25m to the south of the Church of All Saints (Grade I-listed), placed directly in line of sight with the churchyard gate and path from Willen Road. Standing c3m tall, it takes the form of a large panel with the top curved in stages. The panel is raised on a plinth, rectangular in plan. A Latin cross with a decorative border is carved in relief to the front face of the panel, forming recessed quadrants in which are carved inscriptions:

The nine names are recorded on the front face of the base whilst, to the rear of the panel, the dedication continues GREATER LOVE HATH NO/ MAN THAN THIS THAT/ A MAN LAY DOWN HIS/ LIFE FOR HIS FRIENDS.

One such memorial was raised at Milton Keynes as a permanent testament to the sacrifice made by nine members of the local community who lost their lives in the First World War. The memorial was designed by AR Powys. It was erected by Messrs Wilford Bros of Newport Pagnell. The memorial was unveiled by WHM Finch, lord of the manor, on 21 August 1921.

Albert Reginald Powys ARIBA (1881-1936), architect, was known for his work on the conservation of ancient buildings, in particular in his role as Secretary to the Society for the Protection of Ancient Buildings (SPAB) from 1911 to his death. Having been articled to CB Benson (Yeovil), and Assistant to WF Cave and William Weir, he passed his qualifying exam in 1904. He was in independent practice from 1908 and in partnership with John Macgregor from 1925. In 1928 he published his classic reference book ‘Repair of Ancient Buildings’. Powys also designed the war memorials at Godalming, Blo’ Norton, and Meanwood, all of which are listed at Grade II.

Milton Keynes Village War Memorial, which stands in the churchyard, is listed at Grade II for the following principal reasons:

* as an eloquent witness to the tragic impact of world events on the local community, and the sacrifice it made in the First World War.

* an unusual war memorial designed by noted architect AR Powys ARIBA;
* unusually, the memorial has not been adapted for Second World War commemoration, and thus retains its original design intent.

* with the Church of All Saints (Grade I-listed), and Manor Farmhouse, The Old Rectory, and the Wall to the road west of The Old Rectory (all Grade II-listed).