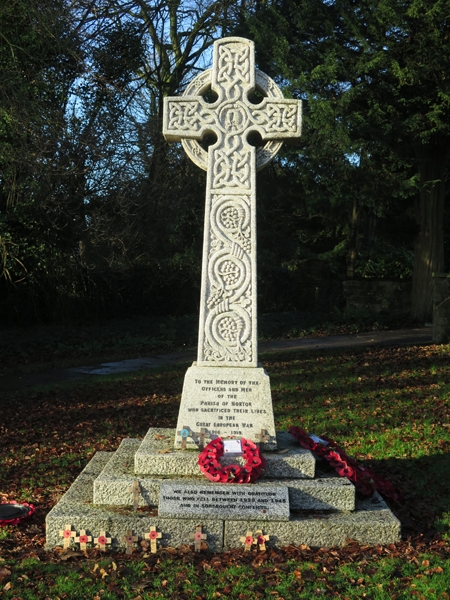 PLAN: a cross set on a tapering, square base standing on three square steps.

DESCRIPTION: the war memorial stands in the churchyard of the Church of St James the Great (Grade II*, National Heritage List for England 1271180). It takes the form of a tapering Celtic cross in white Cornish granite with lead lettering painted black. The cross head is carved with a raised knot work design. The central roundel on the front, east face is carved with the image of a pelican feeding its young with its own heart’s blood. The east face of the tapering shaft is carved with a trailing vine stem bearing leaves and grapes and the remaining faces are carved with interlaced knot work patterns. The east face of the tapering base has the lettering TO THE MEMORY OF THE / OFFICERS AND MEN / OF THE / PARISH OF NORTON / WHO SACRIFICED THEIR LIVES / IN THE / GREAT EUROPEAN WAR / 1914 – 1919. Beneath it says THIS MEMORIAL WAS ERECTED BY PUBLIC SUBSCRIPTION. The south face of the base says OFFICERS with three names and beneath, NON-COMMISSIONED OFFICERS with four names. The north and west faces bear the names of the 16 MEN.

A granite wedge has been set on the east side of the bottom step. It is inscribed WE ALSO REMEMBER WITH GRATITUDE / THOSE WHO FELL BETWEEN 1939 AND 1945 / AND IN SUBSEQUENT CONFLICTS.

One such war memorial was raised at Norton as a permanent testament to the sacrifice made by members of the local community who lost their lives in the First World War.

Norton War Memorial was funded by public subscription and was unveiled on 26 June 1920. It commemorated 23 local men who lost their lives in the First World War.

Later a stone wedge was added to the memorial commemorating those who died in the Second World War and subsequent conflicts.

Historic interest:
* as an eloquent witness to the tragic impact of world events on this local community, and the sacrifices it made in the conflicts of the C20.

Architectural interest:
* a well designed and attractive memorial in the form of a Celtic cross in white Cornish granite with good-quality decorative relief-carving, providing a fitting tribute to the lives lost.

Group value:
* the war memorial stands in the churchyard of the Grade II* Church of St James the Great and in close proximity to a preaching cross, the tomb of Sir Francis Chantrey, a memorial obelisk and the Old Rectory, all of which are listed at Grade II.