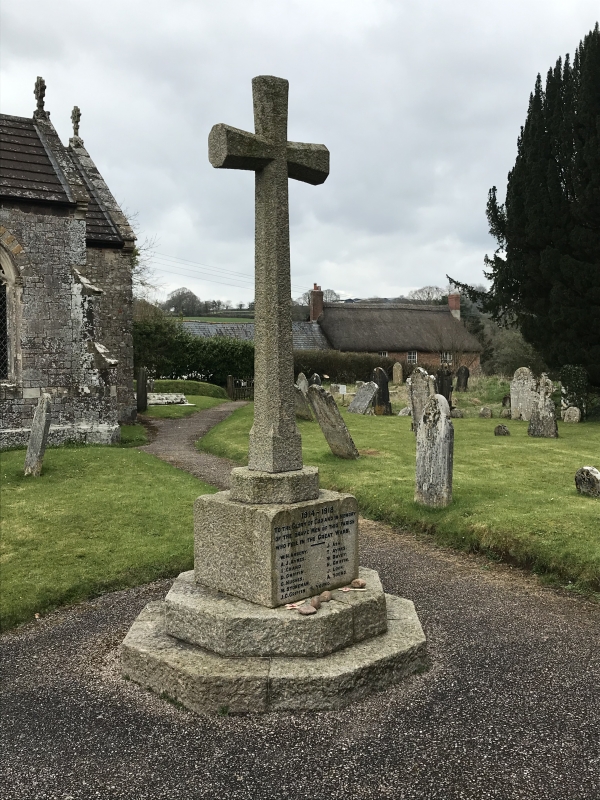 A First World War memorial, erected in 1922; altered after the Second World War.

A First World War memorial, erected in 1922; altered after the Second World War.

DESCRIPTION
The memorial stands in a prominent location in the churchyard to the south of the Church of St James (Grade I), close to the Sanne headstone (Grade II) and the two Webb headstones (Grade II).

The memorial comprises a carved-granite plain Latin cross with a gently tapering octagonal shaft on a square plinth and two-stepped octagonal base. The main inscription in leaded lettering on the south face of the plinth reads: 1914-1918 / TO THE GLORY OF GOD AND IN MEMORY / OF THE BRAVE MEN OF THIS PARISH/ WHO FELL IN THE GREAT WARS followed by the names of the 13 fallen. The north face of the plinth is inscribed 1939-1945 and the names of the three men who fell in the Second World War.

The aftermath of the First World War saw the biggest single wave of public commemoration ever with tens of thousands of memorials erected across England. This was the result of both the huge impact on communities of the loss of three quarters of a million British lives, and also the official policy of not repatriating the dead: therefore the memorials provided the main focus of the grief felt at this great loss.

One such memorial was raised at Talaton as a permanent testament to the sacrifice made by the 13 members of the local community who lost their lives in the First World War. It was unveiled on Thursday 11 May 1922 by Sir John Kennaway.

The names of three parishioners who fell during the Second World War were subsequently added to the memorial, and the word ‘war’ in the earlier inscription changed to ‘wars’.

Talaton War Memorial, which stands in the churchyard of the Church of St James, is listed at Grade II for the following principal reasons:

Historic interest:
* as an eloquent witness to the tragic impact of world events on the local community, and the sacrifice it made in the conflicts of the C20.

Architectural interest:
* as a well-executed example of a plain Latin cross type of memorial.

Group value:
* with the Church of St James (Grade I), close to the Sanne headstone (Grade II) and the two Webb headstones (Grade II).