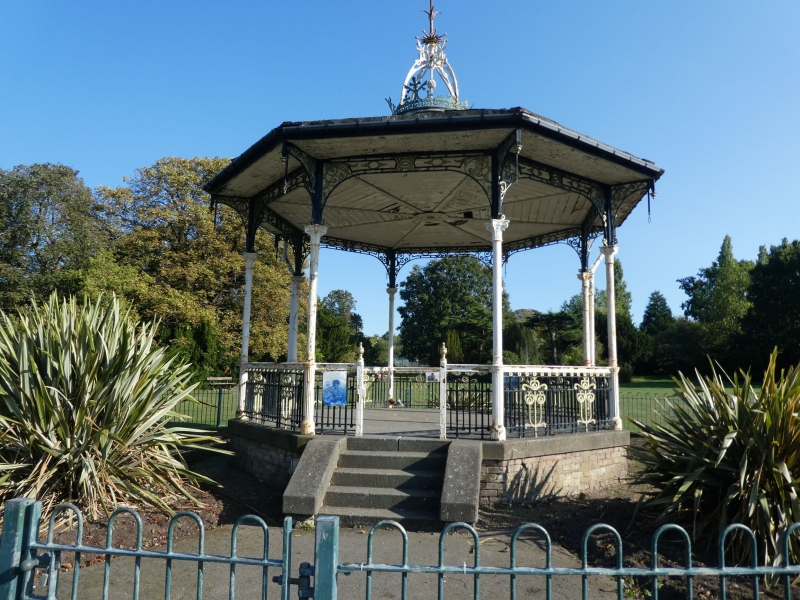 Bandstand. Erected in 1905 to the design of the McCallum and Hope Iron Foundry, Glasgow.

Bandstand. Erected in 1905 to the design of the McCallum and Hope Iron Foundry, Glasgow.

MATERIALS: a cast-iron structure on a brick and granolithic concrete plinth with a timber felt-covered roof.

DESCRIPTION: an octagonal bandstand with eight slender cast-iron columns standing on a brick and granolithic concrete plinth approached by steps. Between the columns is a cast-iron railing decorated with ornamental foliage work. Between the railings there are fluted columns but above it are plain columns with Corinthian capitals. The columns support decorative cast-iron brackets and elaborate fretwork beneath the roof. The bandstand has a felt-covered tented roof crowned by an open cupola enriched with scroll and leaf decoration and other ornamental pattern work, which is surmounted by a finial. The roof has an iron structural frame and a ribbed and boarded ceiling.

The first bandstands in England were built in the Royal Horticultural Society Gardens, Kensington, London, which opened in 1861. They were designed by Captain Francis Fowke of the Royal Engineers (best known as architect of the Royal Albert Hall) as circular structures with domed roofs supported on cast-iron columns. Captain Fowke may have seen a similar pavilion displayed at the Paris Industrial Exhibition in May 1855 when he was working in the city. Bandstands provided a focus for music, serving as the venue for regular concerts, and became widespread by the end of the C19. Some manufacturers, such as Walter Macfarlane of Glasgow, provided catalogues from which a choice of bandstand designs could be chosen.

Croydon Road Recreation Ground, Beckenham, was purchased by the Beckenham Local Board and laid out by Reid and Bornemann of Sydenham in 1890. It formally opened on 23 September 1891 following a local campaign to secure public open space. On 30 January 1905 Beckenham Urban District Council commissioned a surveyor to obtain designs and prices for two bandstands after examining 25 designs from 16 contractors. On 6 May a sub-committee recommended the award of the tender for the two bandstands costing £135 each to the McCallum and Hope Iron Foundry provided that the work was executed within 10 weeks. The foundry was based at the Ruchill Iron Works, Glasgow, where the firm also produced gates, railings, rainwater goods, and ironwork for porches and glasshouses. The second bandstand was erected in Alexandra Park, Penge, but no longer survives. The Beckenham example is now the only bandstand from the foundry surviving in Britain according to a recent gazetteer (Rabbitts 2018). It is illustrated in a 1909 advertisement for the firm.

Croydon Road Recreation Ground has hosted celebrations for coronations, jubilees, hospital fetes, Empire days, May Queen festivals, as well as commemoration services to servicemen of the First and Second World War and formerly a major annual flower show (once rivalling Chelsea). In 1902 Britain’s first public air mail balloon left the park, dropping post at three points in Kent before crossing the Channel and landing near Calais. Harold Bride, a radio operator on the Titanic in 1912, was carried round the park and spoke from the bandstand after surviving the disaster. In 1935 the Mayor of London presented Beckenham with a Charter of Incorporation as a borough within the grounds.

The musician David Bowie (1947-2016) had several associations with Beckenham and the bandstand. Born in Brixton, he moved to Plaistow Grove, Bromley, with his family at the age of eight and went to Burnt Ash Primary School and then Bromley Technical High School (now Ravens Wood School). In April 1969 he began lodging on Foxgrove Road, Beckenham, with Mary Finnigan, his landlady, and subsequently lover and co-founder of the Beckenham Arts Lab. During this particular year spent in Beckenham Bowie continued to advance rapidly on a musical level, working very hard at perfecting and improving his natural talent for writing songs and, working with the other musicians of the Arts Lab played at the Three Tuns (now (2019) Zizzi on Beckenham High Street). The Arts Lab (with Bowie’s close involvement) subsequently organised the Growth Summer Festival, a free one-day festival playing from the Beckenham bandstand on 16 August 1969, which has been described as ‘the first of its kind in the UK’ (Goddard 2019, 92). According to Finnigan, the intention was to set a similar kind of free agenda for artists and musicians as seen at Woodstock. The Beckenham festival followed the release of Bowie’s first ever hit single Space Oddity in July that previous month. One of Bowie’s signature tunes the song told the tale of an abandoned astronaut, Major Tom, marooned in space. It was released in the same year as the first Moon landing and is thought to have been one of the songs Bowie performed that day on the Beckenham bandstand. Although Space Oddity is considered by many to be about the Moon landing Bowie himself said it wasn’t. He explained the song – and Major Tom - as a metaphor for our sense of isolation after having seen and been amazed by Stanley Kubrick’s epic mystery 2001: A Space Odyssey several times on its release in 1968, the year before the Moon landing. The Beckenham festival clearly had an impact on Bowie as it inspired him to write a song about “the ecstasy that swept that afternoon” - ‘Memory of a Free Festival’; a long seven-minute closing piece for his second self-titled album recorded in September 1969 which was later released in 1970 as a carefully re-worked two-part single in homage to the festival. It has been suggested that Bowie may also have penned the lyrics to the song Life on Mars from the steps of the bandstand (May, 2017). In 2013, a new commemorative Memory of a Free Festival was held on the bandstand to raise money for its restoration. It was repeated in 2014 before being replaced by a new event called ‘Bowie’s Beckenham Oddity’ since 2016. The bandstand has now become known as the ‘Bowie Bandstand’ (London Borough of Bromley, 2019).

The bow fencing around the bandstand is thought to be a replacement of 1990. It is not of special architectural and historic interest, and is excluded from the listing.

The Bowie Bandstand, erected in 1905 at Croydon Road Recreation Ground, Beckenham, by the McCallum and Hope Iron Foundry, is listed at Grade II for the following principal reasons:

* as a rare and substantial example of cast-iron work by the McCallum and Hope Iron Foundry, Glasgow, and the only bandstand by this foundry known to survive in Britain;
* for the high quality of the design and the execution of the cast-iron work and casting, which survives well;

* for its historic association with David Bowie, one of the most influential musicians of the C20, who played, compered and co-organised the Growth Summer Festival at the bandstand during his rise to fame in 1969; arguably the first festival in England of its kind, and immortalised by his song “Memory of a Free Festival” on “the ecstasy that swept that afternoon”.