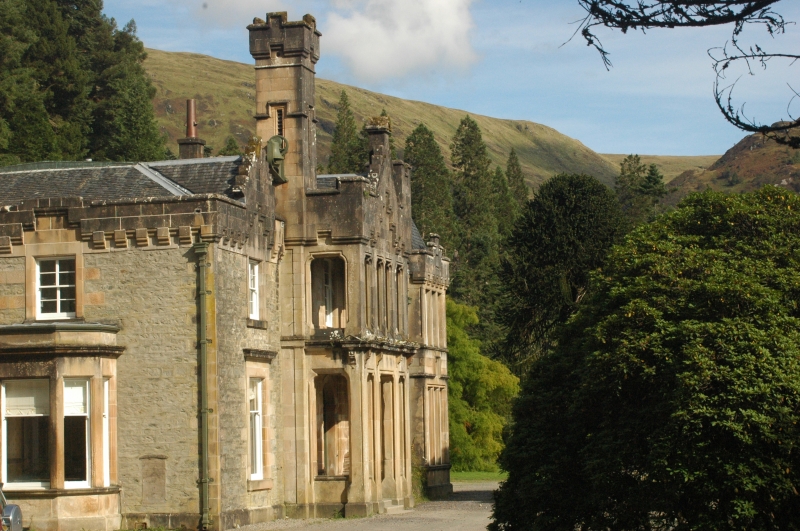 Benmore House is the principal estate house of North Cowal. The house is important for a number of factors, such as the succession of well-known architects responsible for the designs, the quality of the design and details, both inside and outside and the position of the buildings at the centre of an important designed landscape.

The house, an elaborate Baronial mansion comprising various building phases, consists of a 2-storey crowstepped S-facing central block (c1850) with a projecting 2-storey entrance porch and a slender bell-tower. To the right of this, slightly recessed, the E wing is also 2-storey, with a canted corner bay to the single storey end bay. To the W is a gable-fronted 1½-storey block, behind which rises the prominent 4-storey square tower: turreted, corbelled and crowstepped (c1862). To the rear of the house is a large open service court surrounded by further crowstepped blocks (c1874). To the front, overlooking the parkland, is a terrace with a dwarf wall and steps to the lawns. To the NE is an L-shaped crowstepped outbuilding.

Details: when the Benmore estate was purchased by John Lamont for his nephew James in 1849, he found the existing house to be insufficient. He commissioned an architect ' Mr Baird of Glasgow (see notes below) to build a new house. The extent of this house of c1850 is unknown, but it is likely that it consisted of little more than the 3-bay 2-storey entrance block, with an advanced arcaded porch with a balcony above.

In 1862 the estate again changed hands, and the new owner, Mr. Patrick, an American, employed Charles Wilson to extend the house. Drawings by Wilson in the NMRS show the 3-bay central section, with a classical portico (unexecuted) and the crowstep-gabled W wing, which links to the new 4-storey tower, with a circular tower on the SE corner and shorter bartizan turrets on the remaining 3 sides. Wilson's drawings also show a service court to the rear and a long conservatory to the E, which appears on the O.S map of c1863.

In 1870 the estate was acquired by James Duncan, a Greenock Sugar Refiner. Duncan carried out further work to the house, employing David Thomson, the former partner of Charles Wilson, in c1874 to enlarge the service accommodation to the rear, in particular the large 2-storey crow-stepped block with a large multiple stack, enclosing a new courtyard accessed by way of a round-headed arch in a free-standing crow-stepped gable. Thomson also added an enormous castellated glass-roofed picture gallery to the E of the long conservatory and may also have been responsible for the small square-plan bell tower to the rear of the entrance porch. The stepped corbels on the main elevation may also be by Thomson as they do not appear in Wilson's proposals.

The picture gallery does not appear to have outlived by long the ownership of James Duncan, who sold the estate to Henry J Younger in 1889. By the end of the century, Younger had demolished both the gallery and the long conservatory and built the present E wing, taking the details of both the 1850s and 1860s work. The wing terminates in a single-storey block, with the canted corner bay.

The later use of the house, both by the Forestry Commission and as an outdoor education centre has resulted in some work, principally to the interior, but also including a large fire escape on the W elevation of the tower.

Interior: although there has been some alteration to the interior, there remains some excellent features. The layout consists of a large central stair hall with the main reception rooms and a corridor to the library and further accommodation. The drawing room of c1890 has a panelled plasterwork ceiling and an elaborate baroque white marble fireplace with a large overmantel mirror. The library is laden with oak panelling, oak beams and richly-carved cupboards and overmantel. The main stair has a pierced strapwork design, with a large armorial leaded light to the window. The rear stair is also of oak, although with turned balusters. Throughout the remainder of the house are elaborate plasterwork cornices and friezes and good quality joinery, including a Venetian main doorway.

Ancillary Buildings: to the NE of the house is a single-storey L-plan slate-roofed crowstepped outbuilding, probably formerly a power house.

It is likely that the Mr Baird employed by John Lamont to build a house at Benmore was John Baird II (1816-1893), who was in partnership with Alexander Thomson from 1849. Charles Wilson (1810-1863) was one of the major Glasgow architects of the 19th century and was responsible for buildings such as Lews Castle (from 1848) and the former Free Church College (1856-61). David Thomson (d 1911) was a partner in Wilson's firm towards the end of his life.

James Duncan is known to have had a substantial art collection and the gallery at Benmore was frequently opened to the public. In the summers of 1881-2 there were 8000 visitors. Benmore estate is perhaps best known as the setting for Benmore Botanic Garden, run by the Royal Botanic Garden Edinburgh. The garden and designed landscape is notable for the collection of coniferous trees, planted by successive owners since c1820.

Part of B-Group including the Steading, North Lodge and Gates, the Golden Gates, 'Puck's Hut', Fernery, Walled garden and the cottages to the E of it (see separate listings). Within Benmore-Younger Botanic Garden Designed Landscape.