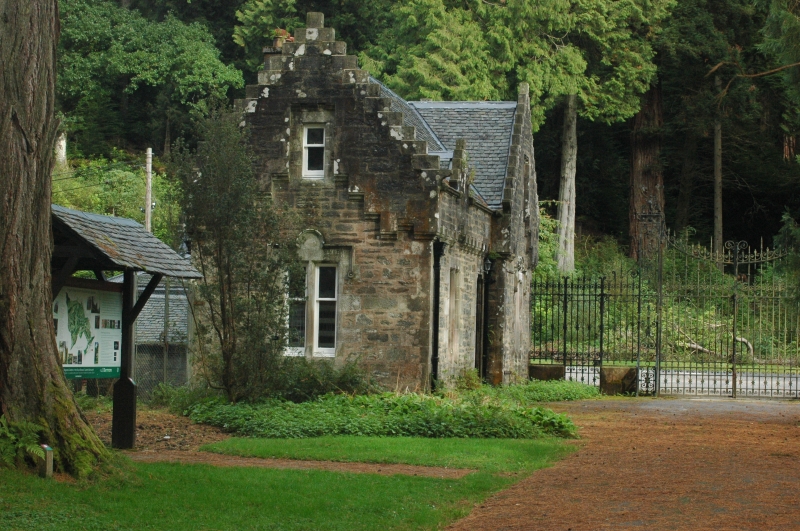 The North Lodge at Benmore was built c1874 in conjunction with considerable expansion and improvement of the estate after it was bought by James Duncan and is likely to be the work of architect David Thomson. The lodge, although relatively simple in design, reflects the design of much of the main house at Benmore. The elaborate wrought iron gates and railings are equally important elements.

The 1½-storey lodge, Baronial in detail, is roughly L-shaped, with two gables at right angles at the entrance. The gables, the principal feature of the building, are crow-stepped, with a stepped corbel-table framing the upper floor windows. Each also has a hood-moulded bipartite on the ground floor. The entrance elevation, parallel to the drive, has a gable to the right, a central door, and a bipartite window to the left with a crowstepped gablet above. The entrance is through elaborate wrought iron gates, with hand-gates to either side and tall railings on ashlar quadrant dwarf walls. Fixed to the railings is a small George V letter box.

The lodge is currently used as a shop for the Botanic Gardens and the interior has been altered to accommodate this.

In 1870 the Benmore Estate was acquired by James Duncan, a Greenock Sugar Refiner. Duncan carried out many improvements to the estate, including extending the house and building a number of worker's cottages. This lodge belongs to the same period of improvement, circa 1874 and was built to serve a completely new entrance to the estate. Previously, the main entrance had been to the S, on the Glenmassan road where the Golden Gates now stand.

David Thomson (d1911) was a partner in the firm of Charles Wilson (1810-63) and may have carried out much of the work at Benmore in 1862, returning in 1874 to carry out work including the steading, lodge and extensions to the house.

Benmore estate is perhaps best known as the setting for Benmore Botanic Garden, run by the Royal Botanic Garden Edinburgh. The garden and designed landscape is notable for the collection of coniferous trees, planted by successive owners since c1820.

Part of B-Group including Benmore House, the Steading, the Fernery, the Golden Gates, 'Puck's Hut', Walled garden and the cottages to the E of it (see separate listings).