A Category A Listed Building in Dalkeith, Midlothian 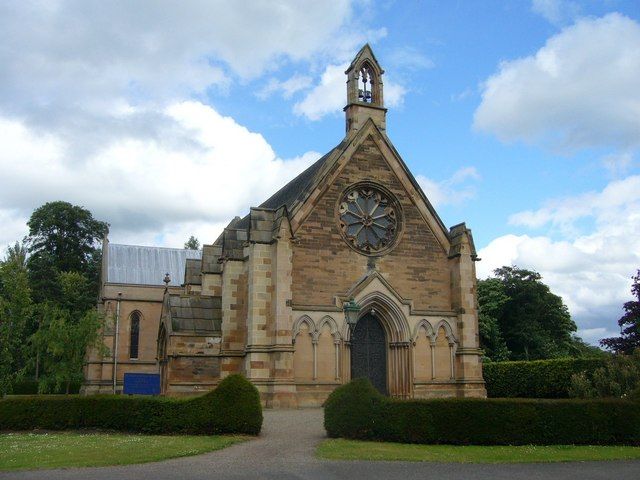 to S. Chapel set in re-entrant angle to N.

CHAPEL AND TRANSEPT: L-plan, with chapel to E and transept to W, with porch in re-entrant angle. Moulded reveals to lancet windows. Moulded course below parapet raised to follow gable lines; cross finials.

STAINED GLASS: E chancel window and wheel window by Ward and Nixon of London, 1845. Window in bay to left of centre to N. Paired lancets to N in transept in memory of 6th Duke of Buccleuch by A K Nicolson, 1927. Window to E and 2 windows to N in chapel by James Powell and Sons, 1913-15.

Ecclesiastical building in use as such. St Mary's Chapel was commissioned by Walter Francis, 5th Duke of Buccleuch as a private chapel. The design was by Burn, and Bryce superintended the building from 1844-54. Benjamin Ferrey superintended the carving of the capitals and bosses.

The Chapel was consecrated and opened for worship in 1854. The Chapel, which could accommodate 250, was used by the Buccleuch family and servants of the Estate, and was also open to Episcopalians in the area. In 1958 it was transferred to the congregation.