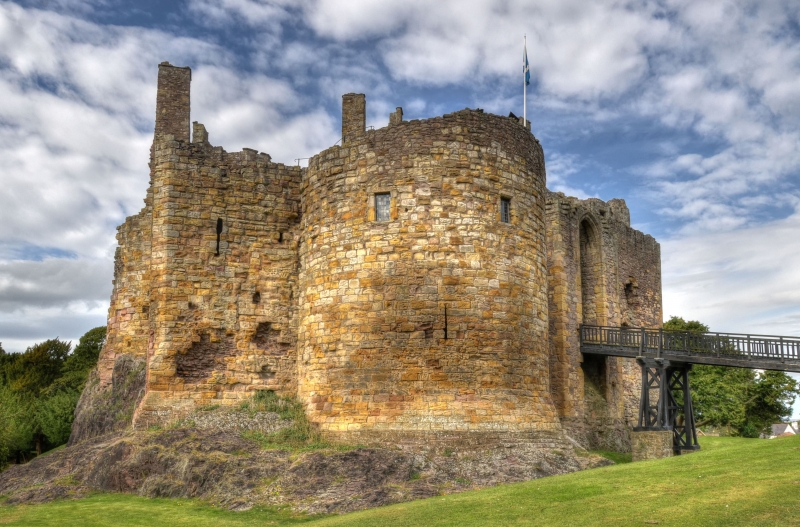 Castle Gate: The castle gate is a 16th century round arched gateway forming an entrance to Castlemains. It is set within the partial remains of a rubble wall. The surround to the north has quirk-edged roll moulding, and the south a segmentally arched embrasure. A bar-hole is evident in the east jamb.

Tower: The tower is earlier 19th century in date. It is a circular, two-storey tower, built of stugged sandstone ashlar and set at the west angle of the boundary walls. It is battered at the base, with arrow slits. There are paired pointed windows to the east with diamond pane glazing. A forestair to the south serves as a porch to the doorway below, with a doorway above. Below a crenellated gablet coped parapet is a string course with water spouts bearing curved arrow slit details. There is a single diminutive chimney to the northeast behind the parapet.

North and west entrance gateways and boundary walls: The walls are earlier 19th century in date. They have raised stugged ashlar bays with gablet coping, roll-moulded outer surrounds, and chamfered inners to hoodmoulded gateways. The timber doors have yett grilles in their upper panels. The rubble walls are ashlar coped with two stugged ashlar courses and gablet coping set above. The walls bound the north and west of the castle grounds.

The tower entrance gates and wall copings were part of Lady Elgin's "beautification" of Dirleton, bearing similar features in other parts of the village. The tower was deemed the most expensive "lamp standard". Guardianship monument.