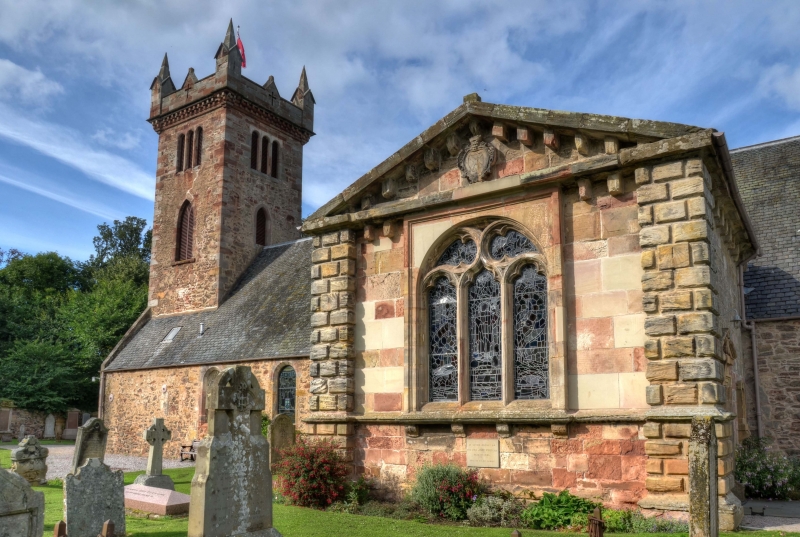 INTERIOR: plain in arrangement and decoration. Reorganised in 1930s when gallery was removed and chancel added. Open tie beam timber roof and stone barrel vault to aisle. Stained glass in 3-lights of aisle, St Francis and the Animals by Margaret Chilton 1935, executed by Marjorie Kemp under FC Mears. Oak pulpit and lectern. Organ by Ingram and Co 1900. Tower vaulted at ground stage with stair turret to bell-chamber above.

CHURCH: Ecclesiastical building in use as such. Parish transferred from Gullane in 1612. Arguably Direlton is the 1st post reformation church in Scotland, before Greyfriars, Edinburgh. Archerfield Aisle begun by Elisabeth Debousy at cost of £45, allegedly to cover the grave of James Maxwell. The 3-light window may have come from the earlier collegiate church at Dirleton. Before being raised, the tower contained a lectern dovecot above the priest's room. The former parapet marked by waterspouts. "WR" initials by top storey, explain date 1825 for raised height.

SESSION HOUSE AND HALL: gablet skews, with vaulted skewputts to both are part of Lady Elgin's "Tidying" of the village, recurring elsewhere. The Hall may incorporate earlier school.