A Category B Listed Building in Edrom, Scottish Borders 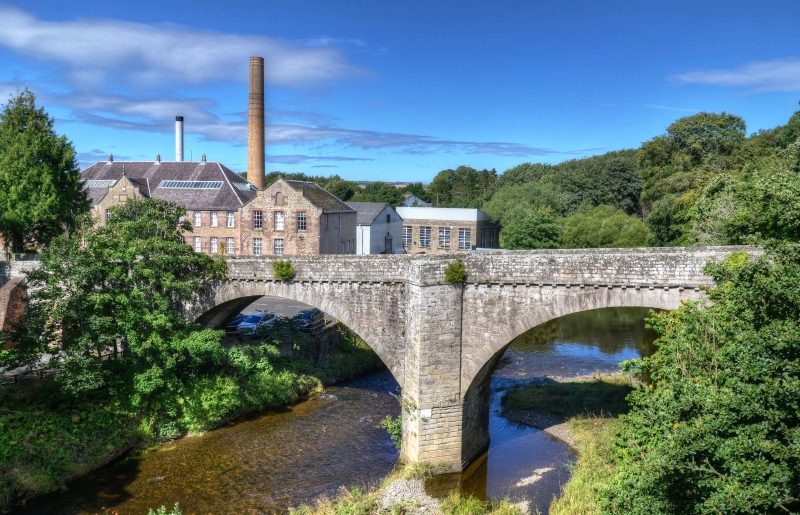 David Cousin, architect, dated 1842, with dated alterations and additions in 1852, and 1897; later alterations, some demolition and additions. 2- and 3-storey W-E range, sited on land falling to E with tall brick stalk to N. Squared and snecked sandstone with droved ashlar dressings; painted rubble and brick side and rear elevations.

Variety of windows, mainly 12-pane windows of a variety of type, including timber sash and case, fixed pane, and with 3-pane upper hopper. Slate roof to each section, with strip rooflights to 9 and 13-bay groups. Conical vents in place to ridge.

The weir is still in place along with the timber and iron mechanised sluices at ladehead. Red sandstone round-arched bridge over lade. Filtering ponds still in use, 1996. According to a photograph of the mill at the turn of the 20th century, the 3-bay group to S elevation formerly had a skew gable with kneelers and an apex stack, in a similar style to the other gables to S elevation. There is seen a square-plan stalk in this photograph, which has since been demolished. The construction which took place from 1842 onwards was carried out by

Y Trotter Co, when the mill was moved from further upstream at Broomhouse Mill. The site is one which had been used as a mill by the Martin family. The opening in 1842 is described at length in the Berwickshire Warder, where the architect, engineer (Mr Bertram), builder (Mr Balsillie), joiner (Mr George Renton), and the plumber

(Mr DA Lamb) were toasted by Mr Trotter. The new mill was highly successful during the 19th century. There was formerly an internal railway in the mill, along with mainline railways. Formerly listed in Chirnside Parish.