A Category B Listed Building in Killin, Stirling 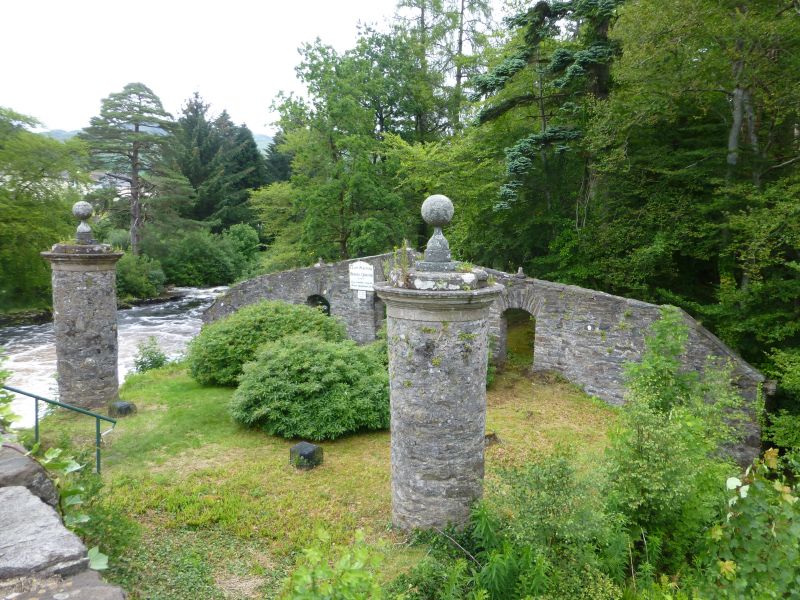 Probably dating largely from the late 18th century, but on a site with ancient origins, this important burial ground is spectacularly located on an island in the Dochart River which is consequently imbued with contemporary Romanticist ideals. Access is from the Bridge of Dochart (see separate listing) where one first encounters a pair of large rubble piers with ball finials before passing through a rubble screen spanning the island with three segmental archways, the largest in the centre. There is the idea of a ceremonial procession before the burial ground containing the graves of the Macnab Clan chiefs is reached. Although the origins of the burial ground are not clear, there is much more here than just a burial place - there is a carefully conceived composition set on an historically important site. The Clan Macnab Burial Ground is therefore not only of interest as a part of Clan history, but it is clearly set apart from its contemporaries and is arguably the epitome of its type.

The burial place itself (which may date from the early 18th century) is at the far end of the island and consists of a near-square rubble enclosure which is open to the elements. There are no openings except on the South elevation which has a central gated entrance flanked by a pair of openings, all segmentally arched. Atop the centre of the walls to the West and East are two stone heads of Neish's or savages, which form part of the Clan crest and the arms of the Chief. There are 15 graves within the burial place itself, nine of them being clan chiefs, including an apparently medieval slab effigy. A grave for 'Finlay Maknab' (d 1573-4) is located there. There are a number of graves also just outside the enclosure.

The central part of the island is a Scheduled Ancient Monument, believed to contain 2 prehistoric forts. It is unclear when Inchbuie was first used as a burial place. It is possible that burials were taking place here from the medieval period onwards but that formalisation of the Island with its processional pathway, screen wall and enclosure was created in the late 18th century as a response to Highland Romanticism. Dorothy Wordsworth was impressed by what she saw in 1814, 'altogether uncommon and romantic - a remnant of ancient grandeur: extreme natural wildness - the sound of roaring water, and withal, the ordinary half-village, half-town bustle of an everyday place'. Early drawings show the island without the present tree cover, making the burial place much more obvious than it is now.