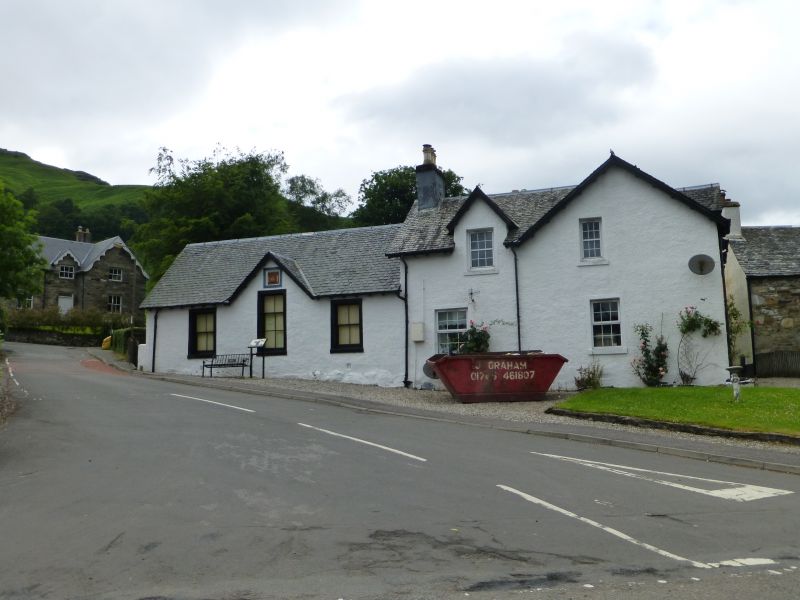 This building consists of a 2-storey house now converted to form 2 flats (White House and Breadalbane Cottage) and an adjoining single storey wing which was converted to a Masonic Lodge in the earlier 20th century. Originally dating to circa 1845 the building is composed of white harl and is located at a crossroads in the village. The building retains much of its architectural character and is unusual in that its principal 3-bay frontage does not face the street and its gable end is given this prominence instead. The gabled dormers are typical of the local architectural tradition. Local knowledge suggests that the building may have related to an earlier sawmill formerly located nearby.

The (East) street elevation consists of the Masonic Lodge to the left which has a 3-bay frontage with the window in the central bay larger than the outer bays. Above this central window there is a gable breaking the eaves and an inscribed stone, 'LODGE BREADALBANE ST FILLANS No 815 A.D 1907'. The entrance is to the rear within a monopitch section. To the right is the divided house consisting of 2 bays, 1 gabled bay to the far right and the other bay with a gabled dormer breaking the eaves. The North elevation of the house is 3-bay with corresponding gabled dormers breaking the eaves and a central entrance. The entrance to the upper flat is located to the rear.

The Lodge's timber-lined interior has recently (2004) been refurbished following discovery of dry rot.

Predominantly timber sash and case window to the Lodge, 4-pane and 2-pane over 4-pane. The house has non-traditional replacement windows.

Part of a B-group with Birchbank, Glengarry and Ashlea and Upper Ashlea.

The Earl of Breadalbane gifted the Lodge to the Masons.