A Category B Listed Building in Minnigaff, Dumfries and Galloway 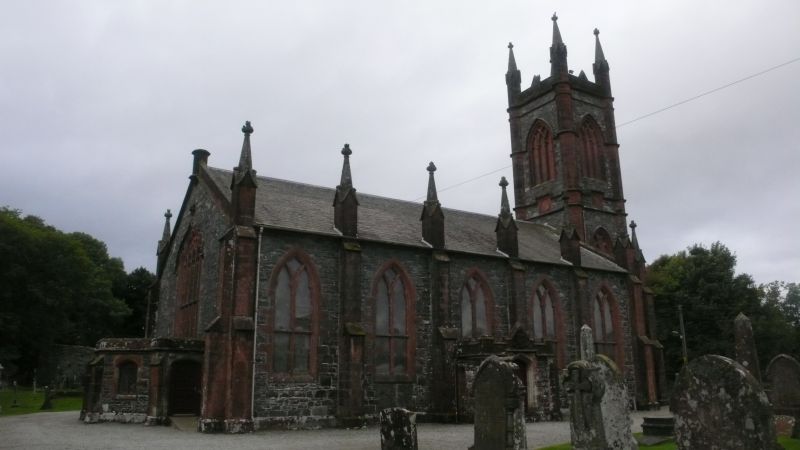 W ELEVATION: tower at centre. Square stair turrets adjoining to left and right; cornice and blocking course to gable above.

TOWER: hoodmoulded, moulded, deeply chamfered, pointed-arched door surround, with nook-shafts, to W. Hoodmoulded windows at 2nd stage to N, W and S, blind and truncated by adjoining stair turrets to N and S; nave adjointed to E. Windows, with nook-shafts and colonnette-mullions, 3-light intersecting tracery, at 3rd stage, all blind except lower part of window to W; string course stepped over windows at hoodmould. Clasping buttresses, octagonal above 1st stage, rising to pinnacles. Parapet, gabled at centre to each face. Double course between stages and below parapet; upper course between 2nd and 3rd stages stepped over moulded square panel to each face.

Stair turrets flanking 1st stage to N and S, with cornice and blocking course; each with 2 vertically-placed blind round-headed lancets to W and window to outer returns; small square window below to S return.

Dentil-corniced, double-leaf door from tower porch to vestibule. Vestibule slightly advanced into nave to W; doors on returns. Organ to W in gallery, built by Bryceson and Co, London, installed 1872. Clock built into gallery to W.

STAINED GLASS: window to E in memory of Patrick Stewart (died 1865). Stained glass to N and S walls in panels below transom. Window in bay to right of centre of N in memory of Randolph Stewart, 9th Earl of Galloway (died 1873). S wall: window to left in memory of Charlotte Nugent-Dunbar (died 1951); window to left of centre in memory of James MacKie, 1868; window at centre by A Ballantine and Son, Edinburgh, 1910; similarly detailed windows to right of centre and to right. Variety of geometric and diamond-pane glazing, some coloured and some etched, with coloured margins, to remaining windows and above transoms.

Ecclesiastical building in use as such; Church of Scotland. Monigaff Parish Church was built at a cost of $1800 and could accommodate 850.

It was repaired in 1893 and renovated in 1929. Electric lighting and the electric organ blower were installed by John McKie of Bargaly in 1948 in memory of the 2nd World War. Monigaff was united with Bargrennan on 9 May 1962.

The design is very close to Burn's earlier church in Stenton, East Lothian (1829) and his parish church in Thurso.

The CROSS SLABS were SCHEDULED but were removed to Monigaff Parish Church from the Old Parish Church in 1996 to remove them from erosion by weather, and are not Scheduled in their current location.