A Category B Listed Building in Rhu, Argyll and Bute 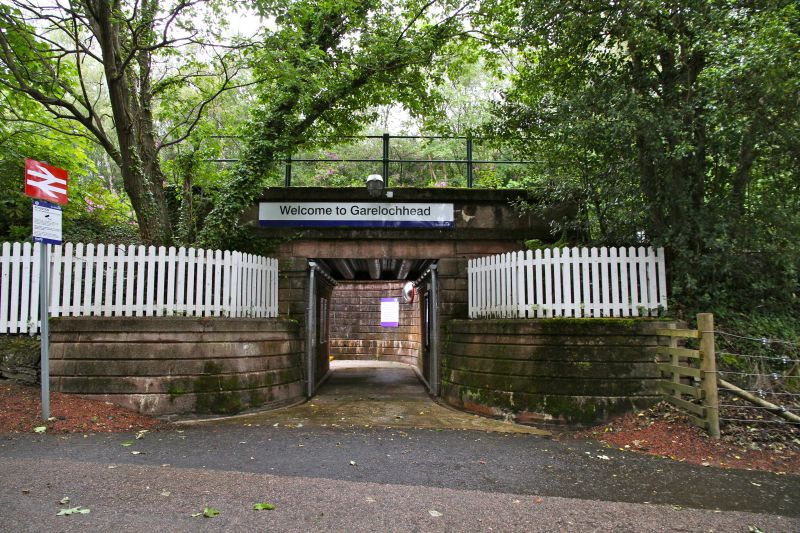 SUBWAY: entry to station via underpass to S of station. Concrete and reconstituted stone with concrete parapet; curved concrete entrance.

Garelochhead Station is one of a series of island platform stations designed specifically for the West Highland Railway (sponsored by the North British Railway Company) in the 1890s. Featuring a piended bell-cast roof extending to form a canopy over each elevation, they are built in a distinctive and picturesque 'Swiss Chalet' style chosen to compliment the mountainous scenery on the route. As a series, the stations add considerably to the architectural and historic interest of one of Scotland's most exceptional railway journeys.

Signal boxes are a distinctive and increasingly rare building type that make a significant contribution to Scotland's diverse industrial heritage. Of more than 2000 signal boxes built across Scotland by 1948, around 150 currently survive (2013) with all pre-1948 mechanical boxes still in operation on the public network due to become obsolete by 2021. The signal box at Garelochhead is an example of the characteristic Type 6a boxes by the North British Railway Company, designed and modified specifically for use on the platforms of the West Highland Railway. Its shallow, piended roof and overhanging eaves are in keeping with the Swiss-chalet style of the station buildings. The associated group value with the station, and with the exceptional engineering and scenic interest of the West Highland Line more broadly, add to its interest.

The West Highland Railway which runs between Craigendoran and Fort William was opened in 1894. Garelochhead station, like Bridge of Orchy, Upper Tyndrum and Rannoch (see separate listings), is of the island platform type introduced by Charles De Neuville Forman, the engineer of the West Highland Railway. The Swiss-style architecture and island platform and are understood to be the work of influential Glaswegian architect, James Miller, although Robert Wemyss may have contributed to the designs while working with J J Burnet. James Miller had formerly worked as an assistant in the architectural office of the Caledonian Railway, thereby gaining considerable experience in designing railway stations. The original scalloped shingles are understood to have been imported from Switzerland. The station was originally glazed with small-pane, timber astragalled windows.