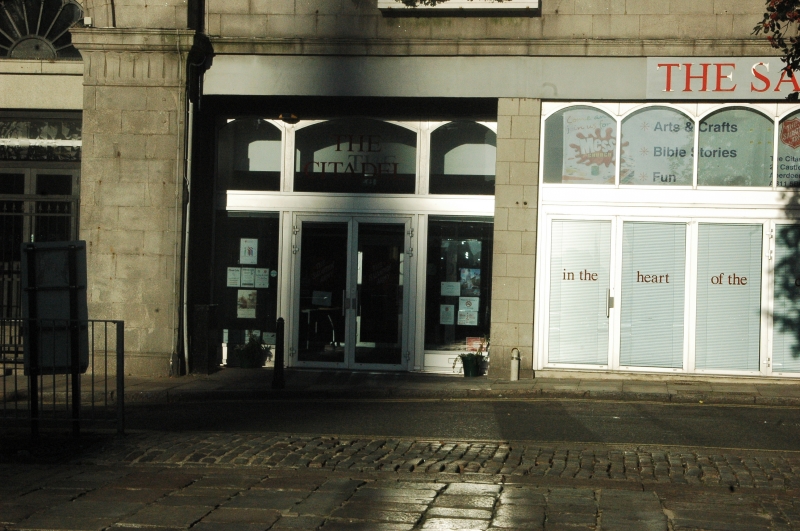 This is a large and prominent building, situated in the Castlegate and terminating the Eastwards vista of Union Street. In Scots Baronial style, it is dominated by its bartizaned tower. Using a variety of castellated stylistic devices, it gives an impressive and commanding presence to this area of the city and forms a foil to the Town House nearby.

The third plan to be finally approved by the City, the Citadel was built by the Salvation Army as a complete complex comprising a worship hall in the centre, shops at ground level and surrounded by domestic flats. At cost of £23,000, the building was placed specifically within an area of large population and social need. A building of this size and complexity was an unusual departure for the Salvation Army, whose normal preference was to have one hall that served a more multi-purpose use. Some of the flats were specifically for Salvation Army personnel use, and these had direct access to the Hall. It is suggested that General Booth, touring the country prior to the building of the Citadel, was very taken with the style of the tower at Balmoral Castle and planned a similar one for the Citadel.

James Souttar (1840-1922) was born in London and articled to Mackenzie and Mathews in Aberdeen from 1852-1860. He then travelled extensively throughout Europe, living for some time in Sweden. He settled in Aberdeen from 1866 and his output include various work within the City, including the Carmelite Hotel (see separate listing). The Salvation Army Citadel is widely considered to be his best work.