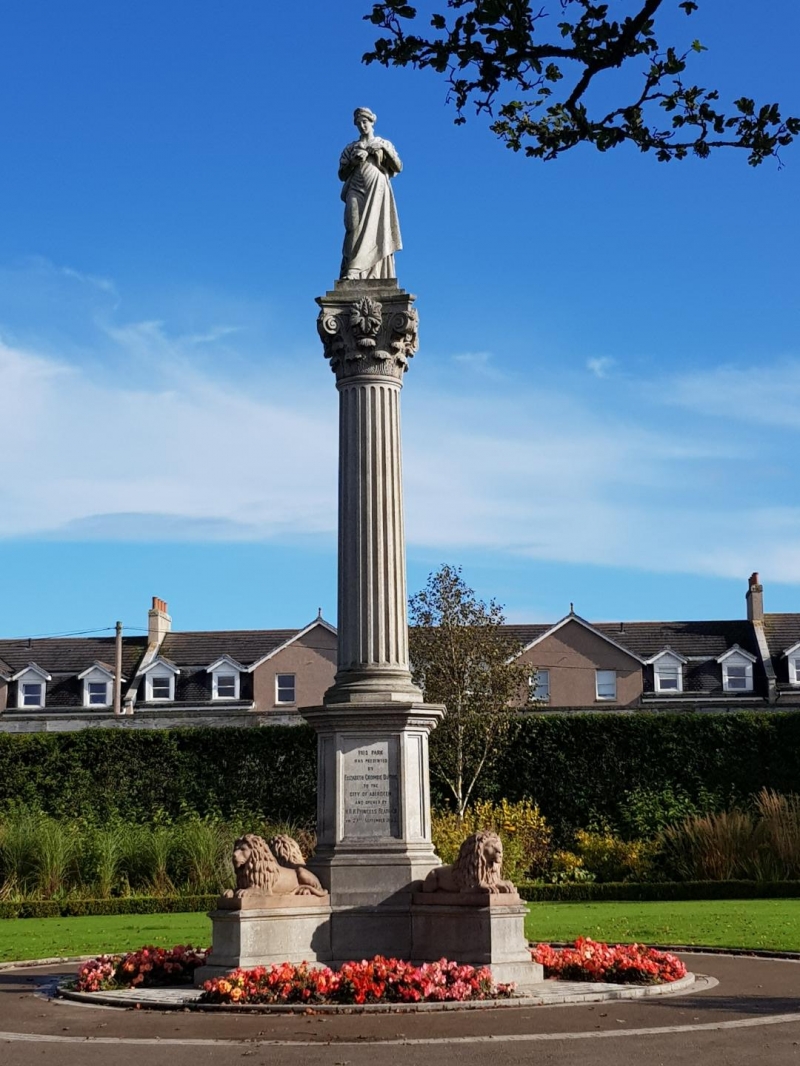 Arthur Taylor, sculptor; John Cassidy of Manchester, designer, 1883. Dressed white-grey granite statue of Hygeia. Cruciform base with pink granite recumbent lion to each arm; chamfered panelled plinth with inscription "THIS PARK WAS PRESENTED BY ELIZABETH CROMBIE DUTHIE TO THE CITY OF ABERDEEN, AND WAS OPENED BY H.R.H. PRINCESS BEATRICE ON 27TH SEPTEMBER 1883"; Corinthian column with fluted shaft surmounted by statue of Hygeia holding snake drinking from cup.

B-Group with Duthie Park Bandstand, Bowling Pavilion, East Lodge, Gates, Gatepiers and Boundary Walls, Footbridge over Upper Lake, Fountain, Fountainhall Cistern House, Gordon Highlanders Celtic Memorial, Gordon Highlanders Obelisk Memorial, McGrigor Obelisk, Taylor Well, and Temperance Drinking Fountain (see separate listings). The site of the Duthie Park was originally a marshy piece of land covered in gorse (or whin, hence the nearby "Whinhill Road), it was known as Pulmoor, now "Polmuir". In 1850 Arthurseat (the villa on the site) and its surrounding land was intended to be developed as a Royal Garden to view the trains crossing the new viaduct to and from London via Ferryhill. However, in 1881 Miss Charlotte Duthie of Ruthrieston purchased the site and gifted it to the City of Aberdeen for a public park. It was decided it should be "available for all classes of citizens, that it should have a broad expanse of grassy sward upon which the young might indulge in innocent frolic and play..." (Duthie Park, p37). The park was designed by William R McKelvie of Dundee, and the first sod, of the 47 acres of land, was cut on the 27th of August 1881, the park being officially opened in 1883. The Hygeia Statue commemorates the Miss Duthie's presentation of the Duthie Park to the City of Aberdeen, and its opening by Princess Beatrice. It was originally made of clay, then cast in plaster, before finally being carved in granite by Arthur Taylor, using the first 2 mechanical pneumatic hammers which had been used in this way in the country. In 1900 Mr Taylor presented the hammers to the Aberdeen Mechanical Society. The four lions around the plinth of the statue are supposed to represent the strong citizens in the park. Hygeia is the Goddess of Health, she is shown as a virgin, holding a cup from which a snake (the symbol of health) drinks.