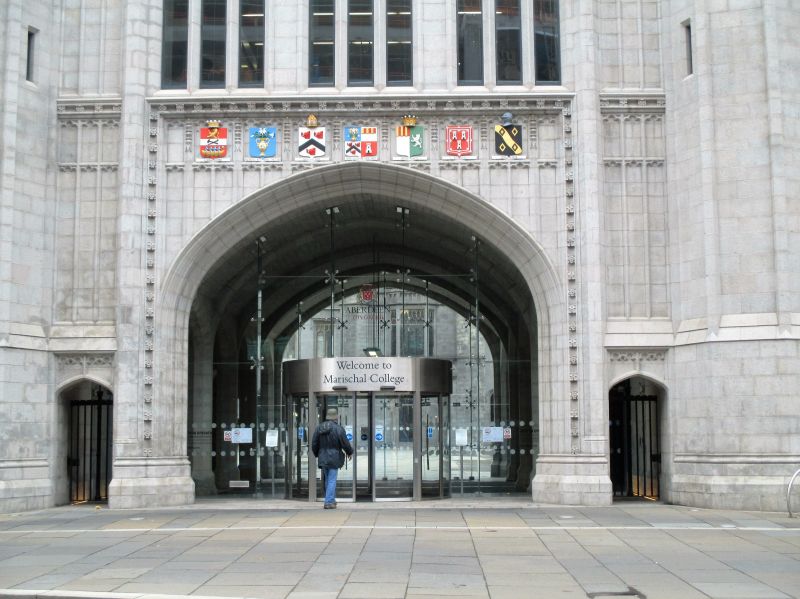 Marischal College is Aberdeen's largest granite building and one of its most defining landmarks. At 400 ft long with an average height of 80 ft, its scale, quality of design and the distinguished work of the principal architects mark it out as a building of considerable importance and the culmination of 200 years of experience working with granite. Within the national context, the building can be seen as a direct expression of ideas of aggrandisement, municipal granduer and the confidence of an expanding Scotland. The skyscraper-perpendicular Gothic style, also used to great effect at Edinburgh's Scott Monument, encapsulates both the religious idealism and the civic confidence of late 19th century Scotland.

Archibald Simpson's replacement 2-storey Tudor style U-plan quadrangle in white Rubislaw granite was completed in 1844. Robert Mathieson undertook some additions and alterations to the basic design in 1873, while the SE wing of the quadrangle was doubled in width by WW Robertson in 1889. Simpson's central tower, originally three storeys high, was extended with MacKenzie's Mitchell Tower. During the same period (1893-7), Mackenzie added the large Mitchell Hall to the rear of the quadrangle, extended the NW wing, added the North East corner tower and rebuilt Greyfriars Church. At the beginning of the next century, a final scheme by Mackenzie dispensed with the earlier Broad Street elevation and replaced it with his masterful Neo-Gothic curtain wall and integrated tower extension to Greyfriars Church. Mackenzie took full advantage of newly developed machine technologies of the time, allowing the granite to be cut in ways that were previously impossible.

The college was originally founded in 1593 by George Keith, Earl Marischal as a protestant alternative to King's College, founded in 1494. By 1837, all earlier buildings on the site had been removed due to their deteriating condition.

Robert Reid's 1834 plan for the college survives, apparently based on a more strictly classical design by Simpson of 1825, which is now lost. The plans for Simpson's extant 1836 design are held at Aberdeen University's King's College Library. Mathieson, Robertson and Mackenzie plans are currently held at Marischal College.

Part of A Group with Greyfriars John Knox Church