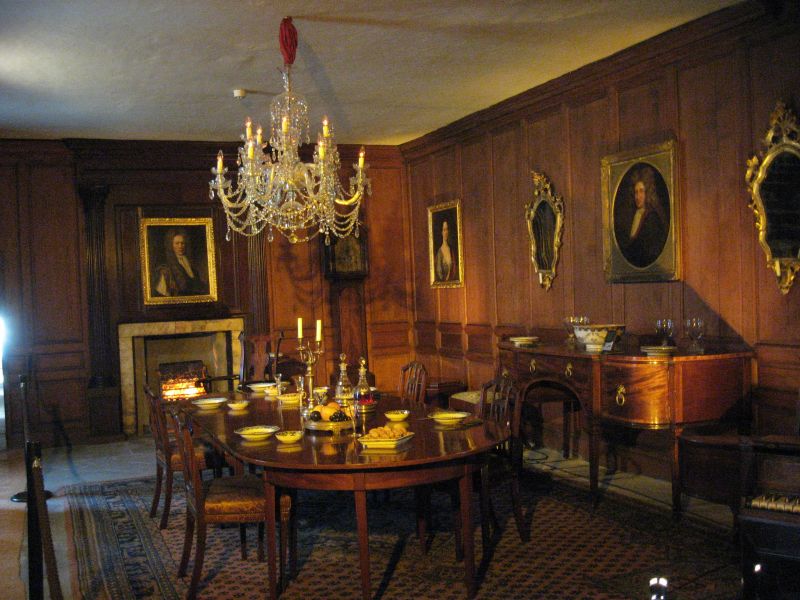 Earlier 17th century painted gallery ceiling constructed from tempera on board depicting The Life Of Christ in 10 panels (some now blank) and with prominent heraldic motif depicting the Five Sacred Wounds of Christ.

ARCHWAY: 1673. To W of house, situated within 20th century rubble wall. Moulded round archway with cornice above. Granite rubble.

Provost Skene's House is the oldest surviving house in Aberdeen and of the few remaining examples of early burgh architecture in the city. It has an exceptional interior with outstanding examples of 17th century plasterwork and a painted gallery with an unusual cycle of religious tempera paintings.

The first records of the house date back to 1545 and the vaulted basement is likely to be from this period. In 1622, this former 3-storey house was bought by Matthew Lumsden who added a 2-storey and attic gabled section to the SW. His Coat-of-Arms, dated 1626, is visible in one of the dormer gables. The house was then bought in 1669 by the wealthy merchant and later Provost of Aberdeen, George Skene of Rubislaw and he reconstructed the original house and built the square tower to the NW. The house was used by The Duke of Cumberland's troops in 1746 and was known for a time as 'Cumberland's House'. In 1732, the house was divided into two separate tenements, but was then brought together again in mid 19th century. Used subsequently as a lodging house (named Victoria Lodging House on the 1st Edition Ordnance Survey Map of 1866-9), it fell into disrepair. Many of the buildings surrounding it were demolished in the 1930s, but a public campaign saved Provost Skene's House and it was saved.

The painted gallery is important and unusual. Originally depicting The Life of Christ in 10 panels, the ceiling is by an unknown artist, although it does show Flemish and Germanic influences. Some of the armorial devices included in the paintings may be those of Matthew Lumsden and this suggests the ceiling was painted in his tenancy between 1622-44.

The smaller painted room depicts landscapes with figures, all done in a Classical style. This painting is of very good quality and can possibly be attributed to John Norie, one of a renowned Edinburgh family of painters and who was known to have spent some time in Aberdeen.

The archway, (former Item 139) was moved to here from Union Terrace Gardens in 1931.