A Category B Listed Building in Bishopbriggs, East Dunbartonshire 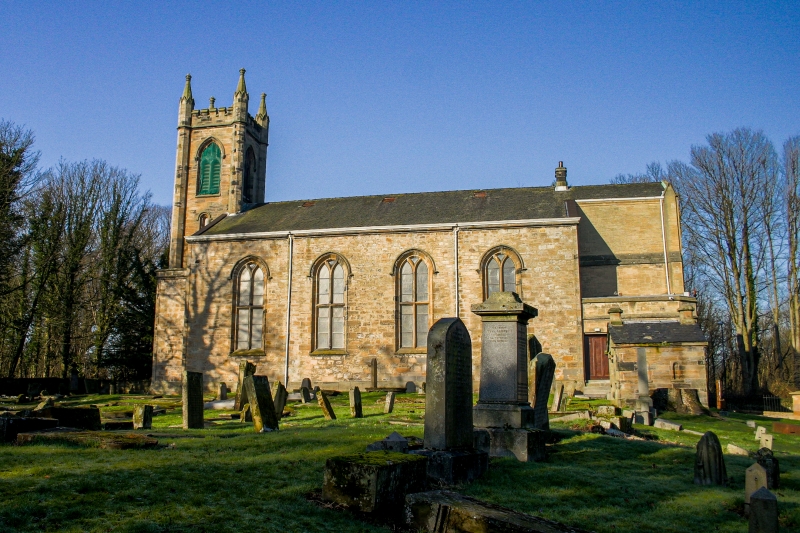 Ecclesiastical building in use as such. Cadder Parish Church is a fine example of the work of celebrated architect, David Hamilton of Glasgow. Hamilton was one of Scotland's most prolific and popular architects of the time, his major works including the Royal Exchange in Glasgow (1827-1832), Hamilton Palace (now demolished) and Hutcheson's Hospital (1802-1805). Charles Stirling (owner and benefactor of Cawder House) was an enthusiastic patron of his work, and previous to taking ownership of Cawder, Stirling had commissioned Hamilton to build his previous mansion, Kenmure House (now demolished, on the site of Bishopbriggs Golf Club to the SW of Cawder). Hamilton then executed the Cawder Estate improvements between 1813 and 1815, before returning to Cadder again in 1825 to build Cadder Parish Church. It follows earlier work by Hamilton around 1815-18 at Cawder House and Estate, ancient home of the Stirlings of Keir and Cawder, major benefactors of the current church. The church sits within this extensive estate, to the SE of Cawder House and just S of the Antonine Wall (SCHEDULED ANCIENT MONUMENT), on a site that is known to have housed a place of worship since at least 1150. It is the third known church on the site, a pre-Reformation church being replaced in 1750, and this in turn being replaced by the present building, begun in 1825 with the bell tower finally finished in 1829. The oldest gravestone in the yard dates from 1636, whilst the watch-house dates from 1828, around the time of the present church, when the Resurrectionists were at their most active at the beginning of the 19th century. The church yard at Cadder was particularly susceptible to their thefts due to the close proximity of the church to the Forth and Clyde Canal (SCHEDULED ANCIENT MONUMENT), which lies just metres to the E, allowing bodies to be transported easily to the cities. An iron 'mort-safe' can also be found in the yard, which dates from this period. It is noted in the 2nd Statistical Account of the Parish that some of the eminent families of the area would be buried under the floor of the centre aisle of the church, some even under their own seats. It serves as the parish church for the large parish of Cadder, which stretches from the E edge of Bearsden across to Mollinsburn, near Cumbernauld. The original village of Cadder has now been consumed by Bishopbriggs burgh, but before its expansion and granting of burgh status, the village of Bishopbriggs was first served by Cadder Parish Church, and as a result it is by far the oldest church in the modern burgh. The church has undergone various changes and improvements since it was finished in 1829, with much of the work being funded by the Stirlings and other wealthy families that hailed from the large parish catchment area. Until just after the turn of the 20th century, the church remained true to Hamilton's original design, a rectangular, box-type church with a central pulpit and horseshoe gallery. In 1905, the chancel arch was installed in the E end of the nave and the new chancel was constructed, moving the Gardner window from the E nave wall to the rear of the chancel. Work was also carried out to the pews, heating and the pulpit, before the church was reopened in 1908. In 1914, the balcony was shortened to the present shape and the carved oak front installed, opening up the E end of the nave and allowing the installation of new stained glass windows. The 9 heritors coats of arms, which formerly decorated the original balcony fronts, were emblazoned onto the centre of the vault trusses. Finally, the Chancel Project was carried out in 1980, when pews from the front of the church were removed to allow the creation of a raised platform in front of the chancel, the pulpit moved slightly, the choir pews removed from the chancel and the communion table pulled forward, to sit under the chancel arch. To the rear of the church, pews were removed to allow the vestibule to be enlarged, and a new screen built incorporating original windows and doors. The church was also carpeted and re-painted, including the vault in the vibrant colours found today. The mixed usage of the name Cawder and Cadder to describe the house, village and estate can be a source of some confusion. In the ancient maps of Richardson and Forrest, the parish is marked as 'Cadder' (the parish being one of the original 365 designated parishes), whilst the House and estate are marked as 'Calder'. The use of 'Calder' has since disappeared, and until the early 20th century the estate, village and parish were all refered to as Cadder. The use of the name Cawder was adopted by the golf club and this has since become the most common name for the House and its related estate, whilst the village and parish have continued to be called Cadder. These changes in name and spelling have been put down to gradual changes in dialect and pronunciation through time.