A Category B Listed Building in Culross, Fife 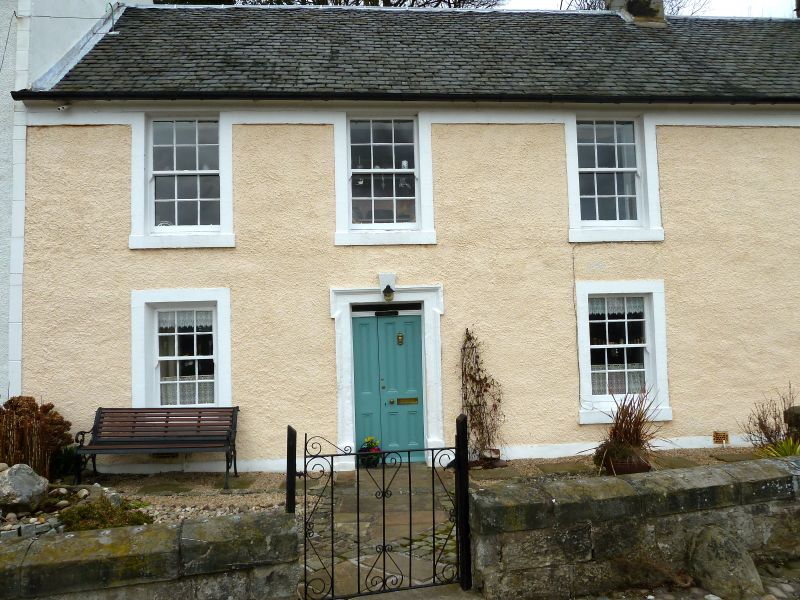 INTERIOR: central flight of stone stairs opposite entrance door. Flagstones to lobby floor. Cupboard in room to W, left of fireplace hides steps and former interlinking door to Undercliff. Kitchen to right of entrance door; central window; blocked window to W of kitchen window, blocked door to E. Door links kitchen to garage. Rear wall cut through for access to timber corridor at 1st floor; thickness of wall visible. Coved ceilings at 1st floor. Early Victorian grate to fireplace in bedroom above kitchen. Murals on three of the walls of this room have been uncovered (January 2006). Possibly dating from late 19th century, they depict scenes of Culross. Late Victorian grate to fireplace in bedroom above garage. Panelled shutters in window splays; window seats.

This was a former 3-bay house (possibly single storey cottage). The extra bay to the E may have been a forge/separate accommodation. The taller upper storey was added circa 1840 and the timber corridor late 19th century. There was a large range in the garage, possibly a former forge/servants quarters. It is possible that the West Green was the area of the burgh's forges, (Balgownie is said to mean 'township of the smiths'). According to Beveridge, a hammerman named Blaw lived here and Wrights House is situated next door. Iron baking girdles were a famous Culross product and Culross had the monopoly on their manufacture from late 16th century until 1727. The internal communication between this and the adjoining Undercliff is interesting, and there was also 1st floor access between the two houses. This is a feature which is seen in other houses in Culross, for example, Low Causeway, Pear Tree Cottage and House (J Laing). The 2-leaf door is also a typical feature found in many of the small Culross houses. For brief history of Culross Burgh see Culross, The Cross, The Study.