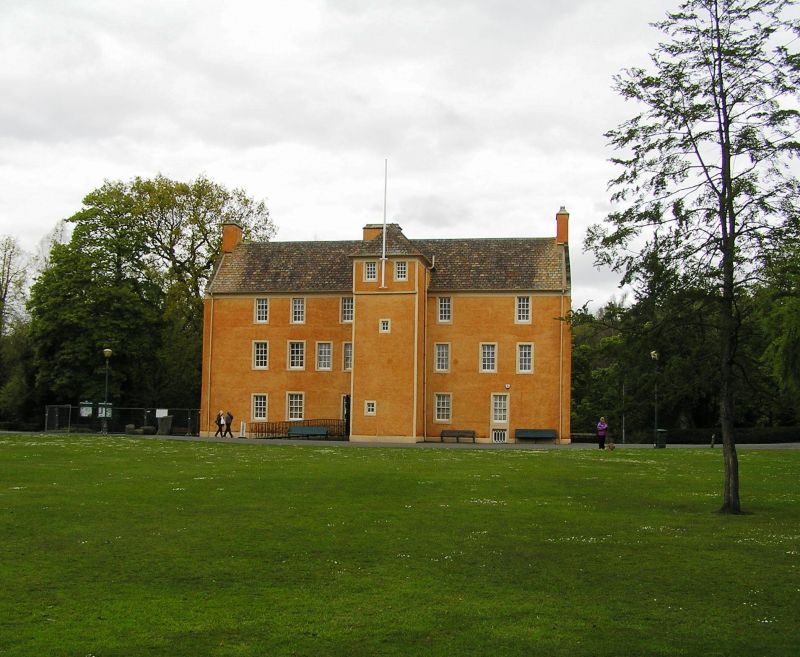 W ELEVATION: 2 windows to ground floor; one to right to 1st and 2nd floors; that to 2nd floor has shaped pediment with heraldic emblem. Small blocked attic window to right.

PARAPET WALL: short section of coped wall along edge of terrace overlooking glen immediately to N of house. Parallel to house except for 2 V-plan projections to N at either end. Stugged sandstone with ashlar dressings; ashlar terminating piers of square plan; chamfered and stepped in in 3 tiers above level of wall; each with band course; top band course adjoins curved cap.

A significant 17th century large house with earlier 18th century alterations and fine early 20th century interior by Robert Lorimer. Originally built for Sir Alexander Clerk, in 1685 the house was acquired by George Murray. In 1775 it belonged to George Chalmers and by 1800 it had passed to the Hunt family, who sold it to Andrew Carnegie in 1902. The surrounding parkland was opened to the public in 1903. In 1904-05 the house was converted to a reading room and museum. It was remodelled by Robert Lorimer a few years later and is currently run as a museum by the local authority. The park is inscluded in the Countryside Commission for Scotland's Inventory of Gardens and Designed Landscapes. See separate list descriptions for park buildings, including dovecot, Pittencrieff Lodge Gateway, E Gateway, W gateway, Tower Bridge and Bridge to W of Tower Bridge.