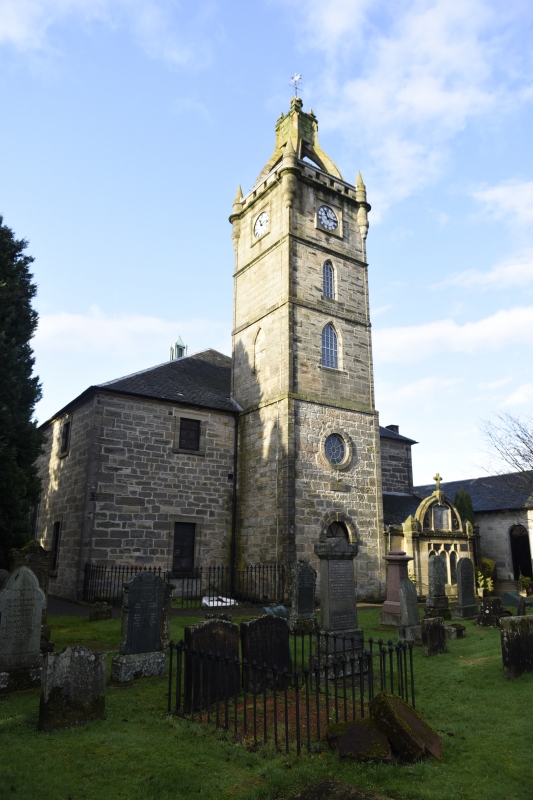 B-Group with Old Parish Church Kirkyard. The contract for the church was drawn up on April 1774. The contract was to build a replacement church; the site had been used for Christian worship for almost 1000 years. East Kilbride church was confirmed to the Bishops of Glasgow in 1178, by a bull from Pope Alexander III. The new church cost ?570 and was modelled on Shettleston Parish Kirk; at this point the steeple was only to reach the height of the walls. In 1818, the decision was made to add to the steeple and Robert Pollock was paid ?250 for completing the crown spire. This is an unusual and highly distinctive feature for a parish church; the most famed example of this type is St Giles High Kirk in Edinburgh. The church was re-roofed and repaired in 1838. This coincided with the construction of a new manse for the minister on Strathaven Road. The clock dates from 1818, the same year as the spire was completed. Initially, there were only three clock faces, the W face being blank. However, this was changed in 1927 when an extra clock face was installed. The earliest known bell to have rung in East Kilbride was cast in 1590 by Peter Van den Ghein, who was one of the pre-eminent bellfounders of the 16th century. This bell had to be replaced in 1689; its overuse to celebrate the defeat of Claverhouse at Killiecrankie cracked it. A later bell suffered a similar fate. In 1881, a bell cracked whilst announcing the assassination of the Russian Tsar. The current bell is known as the Hunner Bell and was installed in 1881. It was cast by the Glasgow firm, John C Wilson and Co, and is celebrated in a poem by Alexander Watt: 'Noo mornig and e'ening a heart-heezing knell / Comes melodiously grand from the Hunner Pound Bell'.