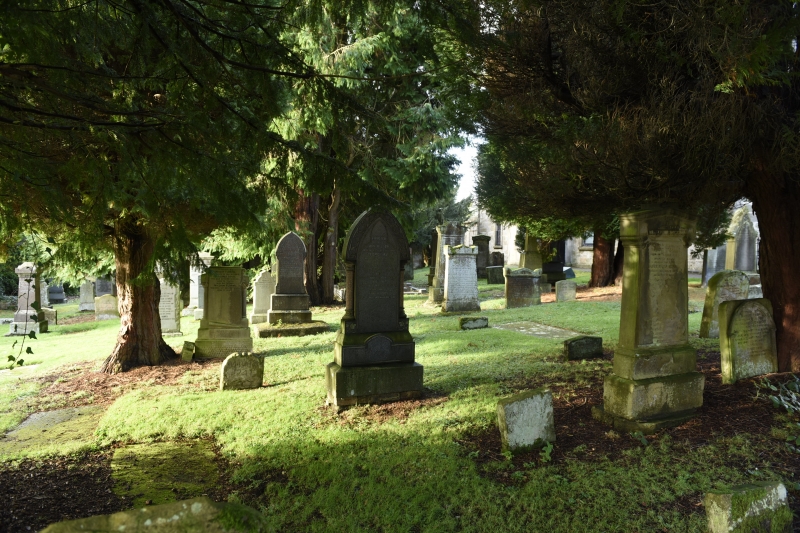 KIRKYARD: site dates from 12th century. Wide variety of gravestones; one of earliest dated 1712; one of latest dated 1906, erected in memory of Mary Somerville, 'the last of the weavers'. Other gravestones of note include burial stone of parents of William and John Hunter, the famous surgeons from Long Calderwood; the 1763 monument to Will Dykes who was killed, aged two, when a cart wheel crushed him whilst he was following his father. His gravestone has symbolic carvings characteristic of the period: angel, skull and cross-bones, hourglass and open book. Flat bed tomb of Reverend James French, minister of the Old Parish Church between 1791 and 1835; he was also tutor of young Walter Scott.

B-Group with Old Parish Church. East Kilbride church was confirmed to the Bishops of Glasgow in 1178, by a bull from Pope Alexander III. However, it is believed that the site was used for worship much earlier than that, and not always for Christian ceremonies. The circular shape of the kirkyard indicates that it may once have been a pagan site, which was adopted and adapted by the early Christians. This was quite a common practice and the word 'kirk' derives from the gaelic 'circ', which means circle. Until 1794, the kirkyard was a right of way and was unfenced. A school lay within the grounds so it also functioned as a playground for the children. In 1794, the current walls were built and access provided via a gate in the SW corner. At this corner, an Offertory House was built. The elders would shelter here to collect and count the contributions of the congregation. The building also doubled as a Session House. The choice of this corner as the entrance was probably influenced by the location of the manse at Brousterland, which was just over the road, and most convenient for the minister. The parish kirkyard remained the town's burial ground until the 20th century; a new cemetery was laid out at Bosfield in 1903. Throughout the 19th century the existence of only one burial ground was a source of amusement to the Old Parish Church's congregation. They had the satisfaction of assuring all the splinter groups that 'they would all end up back at the Parish church'.