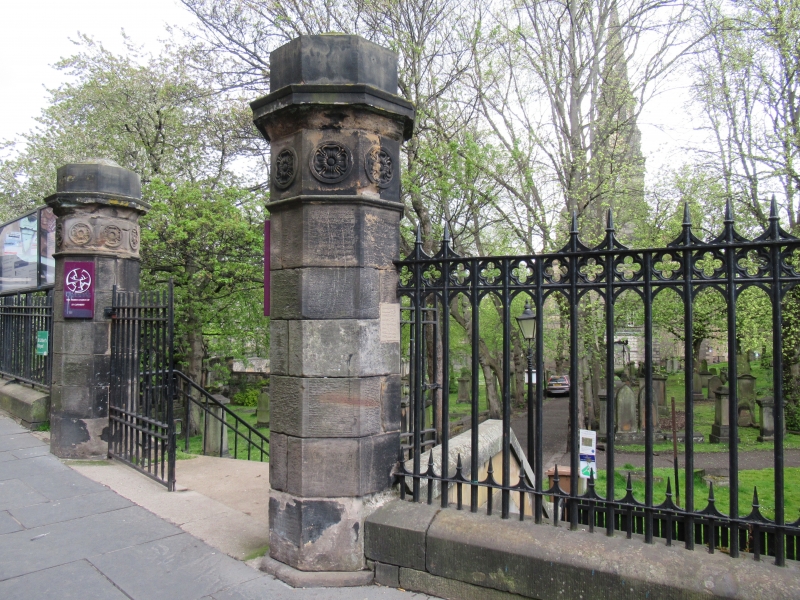 The A Group comprises St Cuthbert's Church, Lothian Road and the Watch Tower in King's Stables Road. Ecclesiastical building in use as such. Built on the site of a medieval foundation (first mentioned 1127). Formerly known as the West Kirk. The Nisbet of Dean Vault of 1692 survives to the N, causing the N transept to be shorter than the S. Rebuilt 1773-5 by the architect/builder James Weir of Tollcross; sundial on W elevation (inscribed VIVETE FUGIO) dated 1774; clock-faces on tower inscribed 1789. This building (illustrated in J and HS Storer VIEWS IN EDINBURGH AND ITS VICINITY (1820) p91) became unsafe and was demolished; a photograph in the church booklet (THE KIRK BELOW THE CASTLE p24) shows the W tower and steeple standing alone, awaiting the construction of the new church. The style and furnishing of St Cuthbert's (central communion table, figurative frieze and paintings, font, stained glass etc), created controversy at the time, reflecting contemporary debate about forms of worship. The font was devised by Thomas Armstrong, Keeper of Fine Arts at the South Kensington Museum, and based on della Quercia's Siena Cathedral font. Gerald Moira was Principal of Edinburgh College of Art 1924-32, and a noted designer both of murals and of stained glass. Organ 1899, R Hope-Jones. 'A general and harmonious scheme of scriptural subjects applying to the whole church' was devised by the Kirk Session in 1893 for the stained glass, and produced by Alexander Ballantyne (lower NE window signed and dated A Ballantyne & Gardiner 1904, and above one commemorating Ballantyne himself). Upper centre N window by Tiffany of New York, circa 1900, 'David going to meet Goliath'; window to left of principal entrance, Mary Wood, 1928, St Cuthbert and St Aidan; 2 windows by Douglas Strachan in War Memorial Chapel, 1922, Crucifixion in apse, St Cuthbert in S wall. In vestibule, inscribed tablet to Robert Pont, 1608; vesica panel, John Flaxman 1802, 'Christ blessing the children', and wall tablet, 1842, memorial to John Napier, reproducing the title page of his book on logarithms. On W front: sculptural memorial to Rev David Dickson, A Handyside Ritchie, 1844. In 1841 a railway tunnel was cut beneath the churchyard, incurring the loss of gravestones above. In 1990 the interior of the church was altered in order to create meeting rooms, kitchen, toilets, disabled access etc; the nave and galleries were foreshortened, the W portion of the ground floor becoming the Lammermuir Hall, the area formerly the rear galleries being known as the Lindisfarne Room (retaining Moira's mural); the upper S transept became the Norloch Room, screened off from the church by a decorative screen designed by students of Edinburgh College of Art.