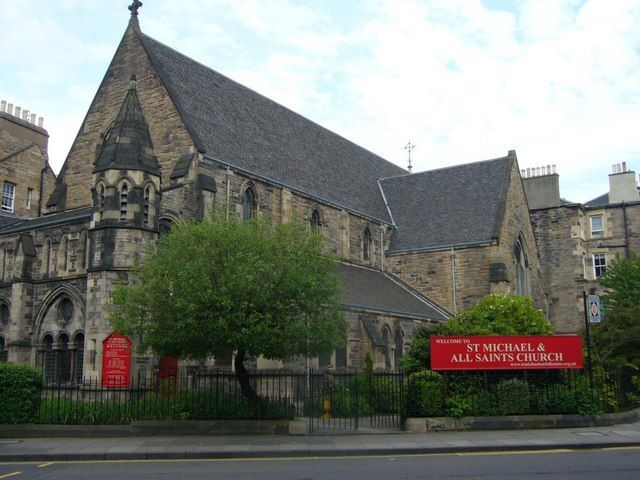 W ELEVATION: 2-storey lean-to narthex has 2 sets of arcaded round-arched 3-light windows with circular windows above in hoodmoulded pointed-arched surrounds; 3 lancets in each bay above (lighting gallery), linked by hoodmoulds and separated by gabletted buttress; rose window with plate tracery in gable above. Polygonal corner tower (containing spiral stair to gallery) has narrow windows to W and S at 1st stage, hoodmoulded pointed-arched louvred openings on each facet at 3rd stage; scalloped mouldings and carved label-stops to stone spire.

B group comprises St Michael's and All Saints Church, Brougham Street, former Parsonage House, 26 Brougham Street, and former Sisters' House, School and Hall, 22-30 Glen Street. Ecclesiastical building in use as such. Congregation first formed 1853 as mission church of St John, Princes Street, in a building on the site of the present Methodist Central Hall. Originally named All Saints; amalgamated with St Michael's, Hill Square in 1965. Burges' altarpiece and the carved pulpit were formerly at St Michael's, Hill Square. Kempe's reredos was made for All Saints.

Begun in 1866, opened 1867 (nave and aisles, transepts, chancel and St Michael's Chapel). It was intended to build a massive tower and steeple at the SW corner, but this was not built due to lack of funds. Instead, in 1876, Anderson designed the 2-storey narthex and triforium, and the SW turret. In 1897 the church was again extended with the addition of the Lady Chapel (with an organ loft above) at the NE, again designed by Anderson.