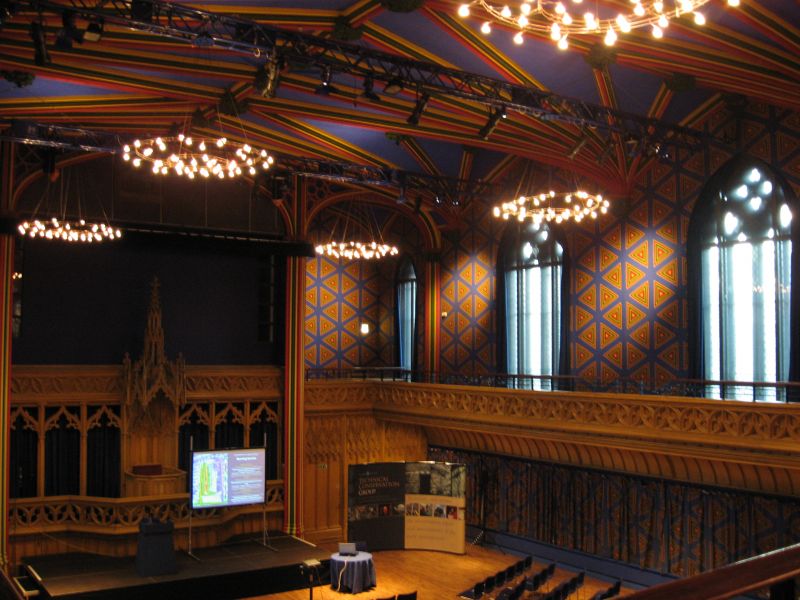 Ecclesiastical building, now Edinburgh's Festival Centre (opened 5th July 1999), housing ticket centre, bookshop, cafe, library and hall; additional space, and a service core, has been created at the rear and in the roof space (Benjamin Tindall, Architects). Built to serve as a meeting hall and offices for the General Assembly of the Church of Scotland (to be known as Victoria Hall) and as a church for the Tolbooth congregation. There had originally been an intention to restore the remains of Holyrood Abbey (with designs by Pugin and Gillespie Graham) as a meeting place for the Assembly. The Assembly had been meeting in St Giles, but after the Burn reorganisation this was no longer possible, and the site at Castlehill, where the foundations of Thomas Hamilton's Knox Memorial church had been laid in 1829, was chosen, and the commission given to Gillespie Graham. The design was the result of a collaboration between Pugin and Gillespie Graham; the Dean of Guild elevations may be in Pugin's hand. The upper part of the pulpit incorporates elements of the Lord High Commissioner's chair, a design for which, in Pugin's hand, is in the NAS. The David Rhind drawings show additions to W including library and toilets; although some of the details of these drawings are similar to details of the building as it exists, it is not clear whether these were built. The Hardy and Wight extension housed a new stair-hall and a library at 1st floor level. After the union of the Church of Scotland and the United Free Church in 1929 the building was no longer required as an Assembly Hall. It was used as the Highland Tolbooth St John's Church until the 1980s. The building has major townscape importance, both closing the vista up Castlehill at the top of the Royal Mile, and from the New Town, where its tall spire is framed in the vista up Dundas/Hanover Street by Playfair's Free Church College (William H Playfair, 1845-50, separately listed).