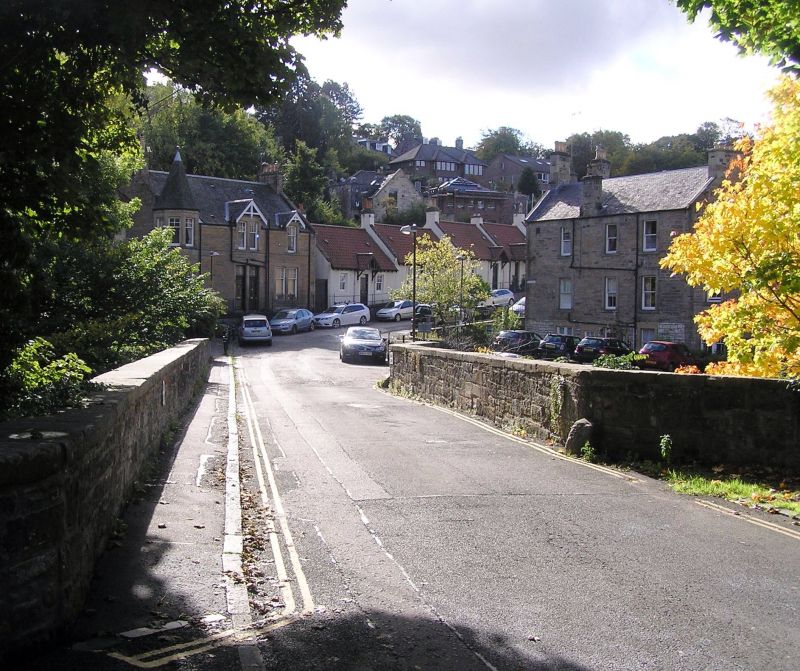 This bridge contributes greatly to the picturesqueness of Colinton Dell and links the commercial and residential area of old Colinton to St Cuthbert's church. It is very difficult to date a bridge of this type, as construction methods remained relatively unchanged for several centuries. There was definitely a stone bridge here in 1666, for Sir James Turner, who was captured by the Covenanters, mentions in his memoirs that they camped by it on their way to Edinburgh (see Gladstone-Millar). The bridge is also shown on John Adair's Map of Midlothian, 1682. However, it is very unlikely that the present bridge dates back to the seventeenth century. According to Professor Ted Ruddock, the original bridge would have been a narrow pedestrian bridge, and the width of the present bridge suggests a late eighteenth century date. A bridge with splayed ends is shown on the 1771 map of James Gillespie's farm, and it seems likely that that is the present bridge. Professor Ruddock also noted that the bridge seems to have been widened, probably in the late eighteenth, or early nineteenth century.