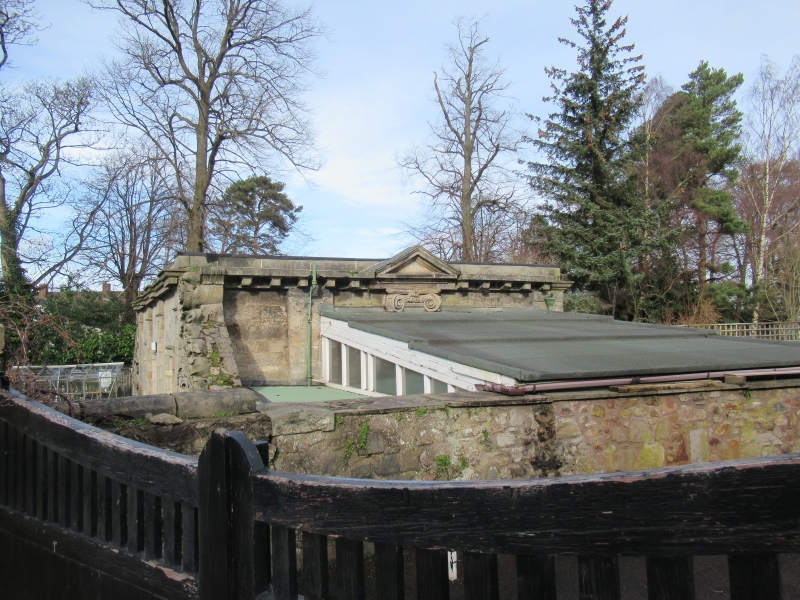 the Royal Infirmary was an important work by William Adam, demolished in 1884. It was a U-plan building, fairly plain for the sake of economy, but with a frontispiece comprising four engaged giant Ionic columns to the 1st and 2nd floors, and a 3-bay attic storey with French roof, lantern, and flanking bracket scrolls. This latter was the operating theatre, and the lantern housed a winch for hoisting patients from floor to floor. Drummond Scrolls comprises this attic storey, although it is unfortunately missing its balustraded roof.

R.A. Macfie of Dreghorn house was a collector of architectural antiques, and bought most of the ornamental stonework from the Infirmary when it was demolished. Drummond Scrolls was re-erected by Macfie as his stable block The niche in the NW elevation was originally at the centre of the 2nd floor of the infirmary, and held a statue of George II by John Cheere (1759). The statue is currently at the present Royal Infirmary in Lauriston Place. The giant Ionic columns from the 1st and 2nd floors of the infirmary now form the Covenanters Monument, on the other side of Redford Road. Drummond Scrolls was renovated for domestic use in the 1960s.