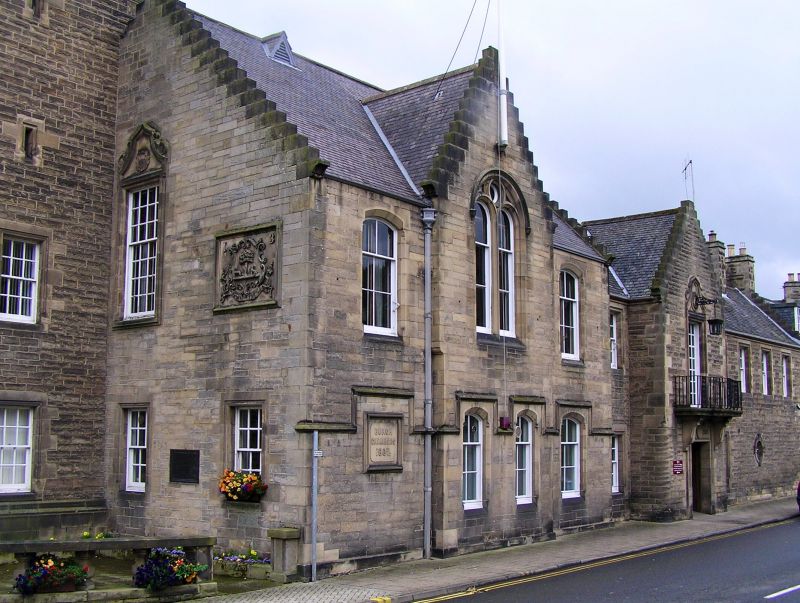 The Burgh Chambers with its War Memorial is an important landmark in Galashiels, prominently sited at the head of Bank Street, dominating the Cornmill Fountain and the Bank Street Gardens, and defining an area that was formerly used for outdoor civic gatherings. The building itself is a striking Scottish Renaissance composition by Scotland's prominent architect of the early 20th century, R S Lorimer (1864-1929).

The Edinburgh firm of Lorimer and Mathew carried out alterations to form a Caretakers House within the Burgh Chambers circa 1939. It is believed that this was sited to the 1st floor interior courtyard, but is now converted to office accommodation.

The original building of 1867 was completed at a cost of £1600. The Clock Tower extension was built on the site of the former mill house to the corn mill which was also demolished to make way for the Cornmill fountain. The balcony to the SW was gifted in 1935 by Alexander Darling in memory of time spent in Galashiels from 1873-77. The bells were donated by the Cochranes, a prominent local manufacturing company, in memory of 2 sons killed in the war.

The basement was previously used as a police station and cells are still evident. The main chamber is used as the burgh chambers whilst the remainder of the building also houses permanent offices for the local council (2006).