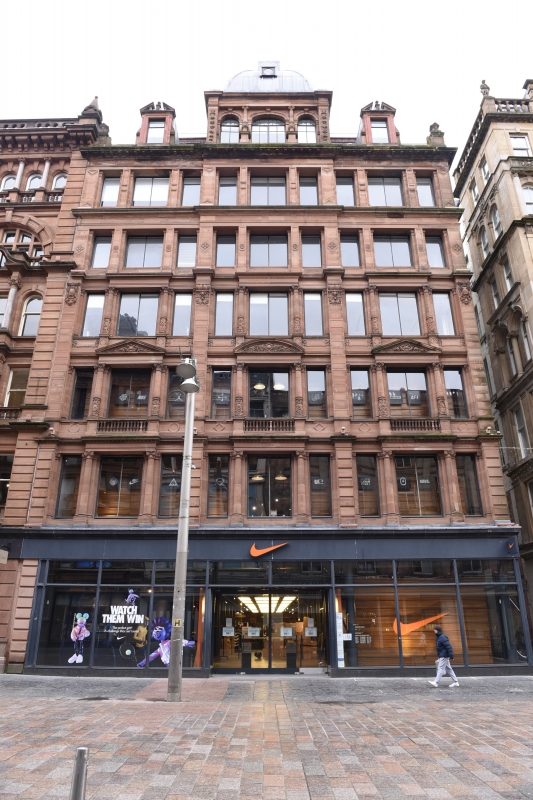 Designed by John Hutchison, with details drawn by Andrew Black and assisted by Charles Rennie Mackintosh, this large department store in Glasgow's premier shopping street was re-built in 1889 for Robert Wylie Hill following a fire in 1888. It was damaged again by fire in November 1903, and reconstructed the following year when an additional storey was added.

Italian Renaissance-style six-storey commercial building with attic and three tripartite bays. It is built of orange-red Corsehill sandstone and has rows of large windows with the glazing set directly into the masonry. The ground floor has a modernised shopfront. The first, second and third floor bays are divided by pilasters of various sizes, either rusticated or banded; central lights to each bay with variously elaborated Ionic columns, second floor central light pedimented; panelled pilaster strips to fourth and fifth floors. Modillion cornice; central square-domed pavilion in attic, with elaborate pilastered and colonnaded details; pedimented flanking dormers. Plate-glass casement and top hopper windows with small-pane glazing to windows of south side.

Photographic evidence from 2012 (Mackintosh Architecture) indicates that unusual Ionic capitals, likely dating from 1889, remain on the ground and first floors of the interior.

Following a disastrous fire in 1888, the Wylie Hill store was rebuilt with a pond in the toy department to demonstrate mechanical ship-models, and sold a variety of goods from enamelled kitchenware to Indian-grown, own-brand tea.

The architect of the 1888-89 rebuilding was John Hutchison, though the design is believed to have been largely the work of his chief assistant, Andrew Black. The rebuilding of Wylie Hill's department store was one of the major works undertaken by John Hutchison during Charles Rennie Mackintosh's final year of apprenticeship in his office (1888-89). According to later recollections of a near contemporary in Hutchison's office, WJ Blain, Mackintosh designed the plaster Ionic capitals for the interior. Blain noted these as being '…brilliantly executed and showed surprising individuality.' (Mackintosh Architecture). The unusual Ionic capitals on the ground and first floors (photographed in 2012, Mackintosh Architecture), may be the ones that Mackintosh designed, and as such would be survivors from the 1889 building.