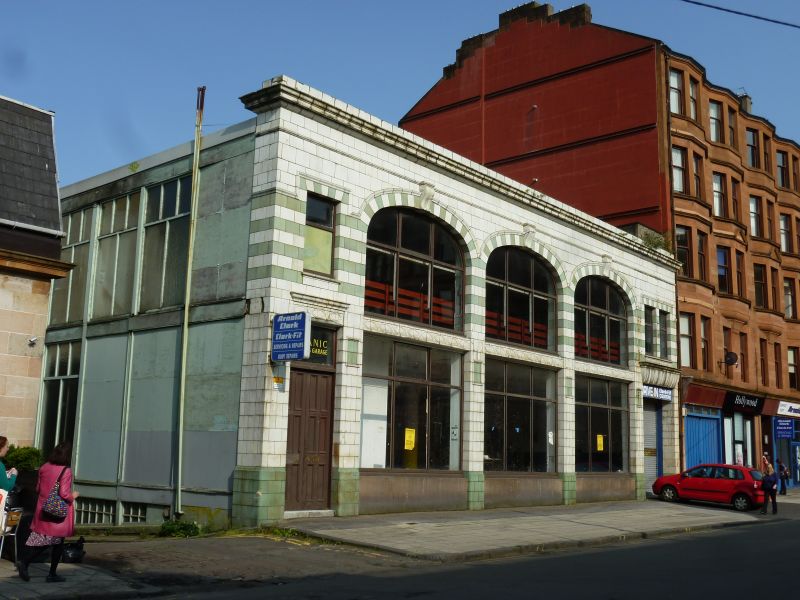 By the early 1900s the site was owned by a Mrs Kennedy and she employed the Glasgow architect D V Wyllie to work on a number of projects in the area, including the construction of the tenement adjacent to the garage from where access to the first floor of the garage was gained. Plans dated 1906 which affected the area behind this neighbouring tenement are titled, 'Extension to Motor Garage'. Earlier plans dated 1905 describe a workshop on the site. While the different phases of development are not yet fully understood it is clear that a motor garage was on the site from at least 1906. The faience street elevation appears (with an additional top storey which was not constructed) on plans by Wyllie dated May 1911 and described as 'proposed additions to garage buildings'. While the earliest parts of the building may have been adapted from existing structures, the green and white faience street elevation phase was certainly purpose-built and deliberately eye-catching. As one of the first of its type this building was innovative and the use of the distinctive decorative faience is of particular special interest. The street elevation remains largely unaltered.

An early photograph of the interior in Along Great Western Road shows metal 'cages' which the owner rented as a space for their car. These do not remain.

The first person to own a motor car in Scotland was Mrs Ivory of Laverockdale House, Edinburgh who purchased a vehicle in 1902. Parking on the street in the early 1900s was prohibited and undesirable and owners required somewhere to store their vehicle. Stables could be converted to garage use but new-build is rare at this early date. For those living in the city, and without a mews house which could be adapted, a public garage would have been a necessity. Those living in grand Glasgow tenements would particularly have required this service. Glasgow was home to many Scottish motor manufacturers in the early 1900s and appears to have embraced the new technology.

Although there are a number of early listed motor houses in Scotland (such as Kinmount, Dumfries & Galloway, dated 1906, see separate listing) these are all associated with private houses. Purpose-built public parking garages which predate the 1920s are extremely rare both nationally and internationally.

The Glasgow Post Office Directory for 1908-09 had entries for only 3 motor garages of which the Botanic Gardens Garage was one, 'Botanic Gardens Garage (Alex. Kennedy, proprietor), private stance to each car owner, repairs and all accessories; agent for Scotland, "Opel" cars. Tele., Nat., 2061; P.O., W458, Vinicombe St., Hillhead.'

The building has had only 2 owners since construction : the Kennedy family ran the garage until it was sold to Arnold Clark in the 1960s and they remain the present owners (2007).