A Category A Listed Building in Pollokshields, Glasgow 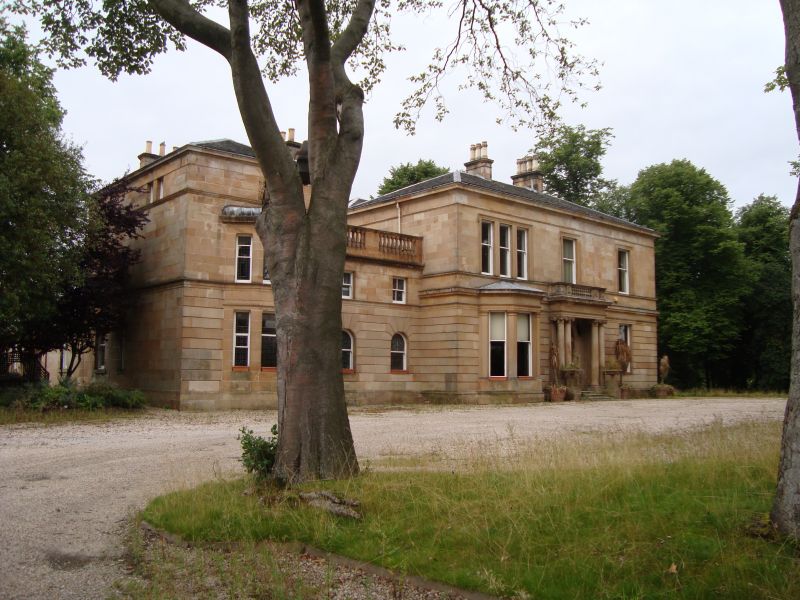 6 Rowan Road is a large two-storey classical villa, built in 1872 to designs by the eminent architect John Honeyman and added to during the 1890s by his architectural partners John Keppie and Charles Rennie Mackintosh.

The 1872 villa is sandstone ashlar with chanelled rustication to the ground floor, minimal Italianate detailing, and hipped slate roofs. There is a three-bay entrance front to the north with a central doorpiece with paired Ionic columns and entablature with balustrade to the first floor window. To the west is a four-bay garden front facing Bellahouston Park. It has a canted bay with Ionic and Corinithian colonnettes, and carved aprons with the date 1872. There is an enriched pediment above the main cornice. To the outer right (returning to the rear) is a single storey billiard room addition with part-glazed roof and behind that, a single-storey 'winter-garden' room with a glazed lantern roof.

The pavilion-like addition to the east has coat of arms over two-storey canted bay with Art Nouveau glazing. Moulded cornice, left hand tripartite 1st floor, splayed bay ground floor, shouldered architraves linked to 1st floor cill band. The lower linking block (between the pavilion and the main body of the villa) has arched ground floor windows and a balustraded parapet.

There is also a detached outbuilding to the rear and a small courtyard entered between engaged gatepiers at the corners of the outbuilding and the pavilion wing.

The villa is surrounded by mature gardens with a sandstone boundary wall, gates with rusticated channelled piers and carved capstones.

6 Rowan Road is in important two-storey classical Glasgow villa with exceptionally fine interiors. It was built for merchant Joseph McLean by the eminent architect John Honeyman in 1872. Additions and embellishments were made by Honeyman's later partners, John Keppie and Charles Rennie Mackintosh (for new owner Thomas Mason) in 1892 and 1897. The villa is of oustanding significance for its rich classical interiors with Art Nouveau details evidencing the early development of the 'Glasgow Style' of interior design.

The villa is located at the south corner of Rowan Road in the villa suburb of Dumbreck. The villa retains a large garden with a good collection of mature trees and a large pond. To the west is Bellahouston Park with Charles Rennie Mackintosh's 'House for an Art Lover' (built posthumously 1991-96). To the east, on land previously belonging to Craigie Hall, is a development of ten late 20th century houses.

Thomas Mason named the villa 'Craigie Hall' when he purchased it in 1892. Mason, who was a stonemason turned building industrialist and engineering contractor, was responsible for carrying out many building works across Scotland including William Young's magnificent design for the Glasgow City Chambers (LB32691). The 1892-97 additions and alterations to Craigie Hall for Thomas Mason include a large 'winter-garden' room under a glazed lantern roof and a billiard room with a part glazed, part barrel-vaulted ceiling. Three of the doorcases in the main hall, and the shelves, leaded glass, fireplace and built-in corner seat in the library all blend classical forms with Art Noveau detail in the early 'Glasgow Style'. An elaborate chimneypiece, also in the Glasgow Style and probably by Mackintosh, remains at one end of the former music room. While there are no surviving documents to prove Mackintosh designed the embellishments to the library and other key rooms, they are accepted as his work on stylistic grounds (Mackintosh Architecture, Context Making and Meaning) evidencing his developing approach to interior design.

Cinema owner Fred Green of Green's Playhouse bought the villa in 1929. It was sensitively refurbished around 1980 as office accommodation, retaining all its important interiors. The property was divided into three self-contained residences in 2014. A series of mitigating circumstances led to the authorised removal of the unique mahogany pipe organ case, designed by Charles Rennie Mackintosh, from the music room (now remodelled as a kitchen). The ornate organ case, designed specifically to fit the dimensions of the former music room at Craigie Hall, is currently in storage (2019) awaiting reassembly and permanent display within a Glasgow museum.

Mackintosh's work is wide-ranging and includes public, educational and religious buildings to private houses, interior decorative schemes and sculptures. He is associated with over 150 design projects, ranging from being the principal designer, to projects he was involved with as part of the firm of John Honeyman & Keppie (Honeyman, Keppie & Mackintosh from 1901). Another example of a large Glasgow villa that was substantially extended by Honeyman, Keppie & Mackintosh is Lilybank House (LB32853, category A). The most important work during this partnership was the Glasgow School of Art (LB33105), which was built in two phases from 1897 and culminated in the outstanding library of 1907. Other key works include the Willow Tea Rooms (LB33173), the Glasgow Herald Building (now The Lighthouse) (LB33087) and Hill House (LB34761), which display the modern principles of the German concept of 'Gesamtkunstwerk', meaning the 'synthesis of the arts'. This is something that Mackintosh applied completely to all of his work, from the exterior to the internal decorative scheme and the furniture and fittings.