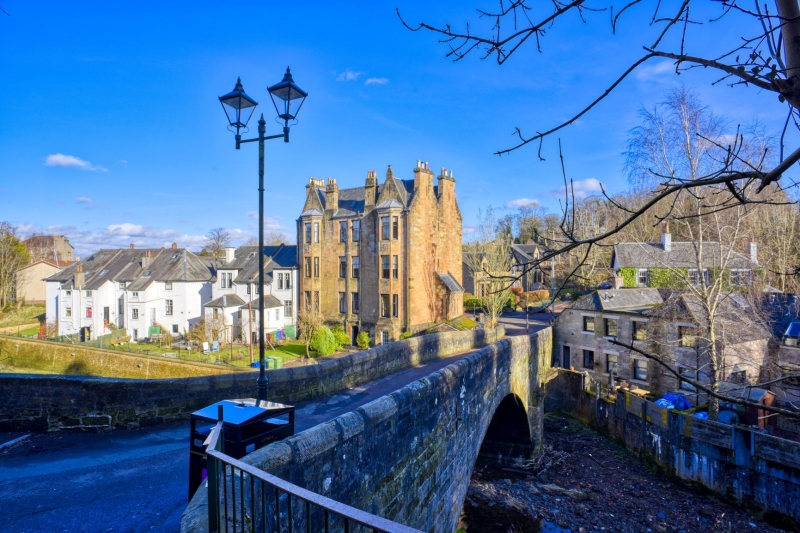 Bridge of uncertain, though comparatively early, date. Visual appearance suggests a date perhaps in earlier part of 18th century - pssibly closer to 1700 (1624 datestone most likely relates to an earlier bridge).

Built mainly of coursed rubble, ashlar voussoirs, parapets and part of upper levels of masonry have evidently been rebuilt from time to time over the years. Pier between arches is thicker than main elements of bridge, splayed where it widens, as if for pointed cutwaters, but unusually, ends are simply squared off (ie not pointed, or, significantly narrowed, as cutwaters would be). Roadway and parapets are narrow, coping of latter with deeply-chamfered arrises.

Walls at west leading up Old Castle Road define early roadway, and are themselves of early date.

The smaller scale of the subsidiary arch raises the question of whether or not it formed part of a previous bridge; but the differences in treatment of the 2 arches (smaller scale of voussoirs; different number of arch stones integrated with inner pier) are not sufficient to suggest such a conclusion should be drawn. Smaller arch primarily for flood relief, though tail-race of nearby mill may have been directed through it too.

The existence on an ancient site of the nearby Old Parish Kirkyard, and of Cathcart Castle, suggets that a recognised crossing point over The White Cart must have existed in this area from an early date.