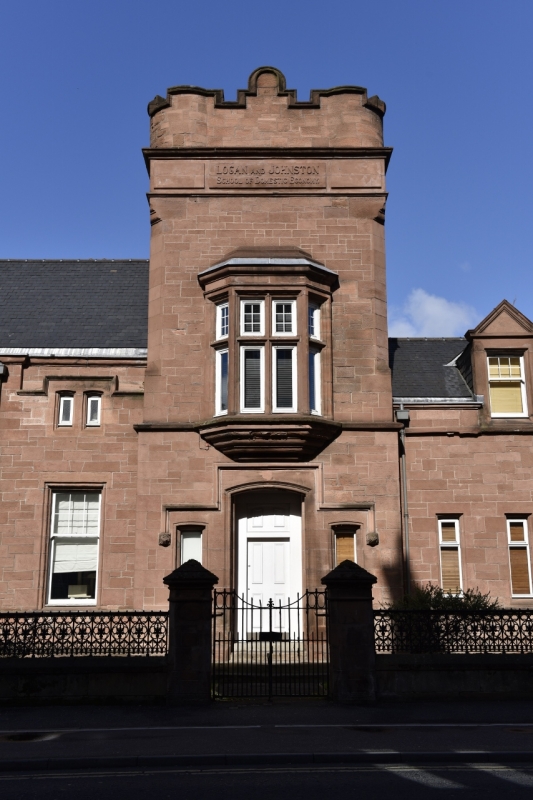 The former Logan & Johnstone School of Domestic Economy is a well detailed building occupying a prominent corner site in Bridgeton. The building is an important surviving representation of the city's educational and social history. Although constructed after the 1872 Education (Scotland) Act the school was not managed by the Glasgow Burgh School Board and therefore is different in design to the many schools constructed at this time. Its crowstepped gables, square tower with moulded parapet and carved plaques make a significant contribution to the streetscape.

The school was founded by William Logan and his wife, Jean Johnston "for the education, upbringing, and assistance in life of poor or destitute step-children or orphans of Scottish extraction, those bearing the names of Logan or Johnston to be preferred" (Groomes Gazetteer). Girls received education in both elementary subjects and essential domestic skills such as cooking, sewing, knitting and laundry duties. Classrooms for each subject and a reading room were located either side of a central corridor. The Matron's living quarters were located on the first floor of the building on the James Street side and were linked by a corridor to the boarders' bedroom on the Greenhead Street side. The beehive relief sculpture on the former school symbolises industry and hard work.

James Thomson entered into partnership with John Baird in 1858. The Glasgow based practice initially retained Baird's style of extreme classical reserve and severity until his death in 1859, after which it developed an astyler Italian Renaissance style with rich detailing and sculptural work. The practice became one of the largest in Scotland and was profuse in the design of commercial buildings. They pioneered the concept of large city office blocks with shops built for rental, such as 217-221 Argyle Street (1863), 101-103 St Vincent Street and 130-136 St Vincent Street (1876) (see separate listings).

The building was latterly in use as the Dolphin Arts Centre, however it was severely damaged by fire on the 26/27 November 1996, resulting in the loss of part of the rear of the building. The remaining section was converted to residential accommodation as part of Carrick & McCormack's development of Buchanan Square, Greenside Street including Greenhead House, 2000-2006.