A Category B Listed Building in Innerleithen, Scottish Borders 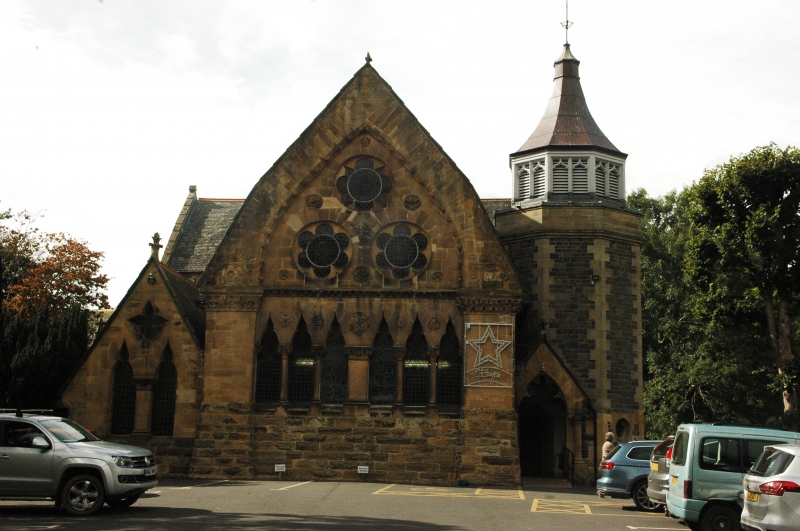 Place of worship in use as such. Innerleithen Parish Church is a fine Gothic style church originally designed by renowned architect Thomas Pilkington (1832-1898) in 1865 with comprehensive reconstruction in 1887 by James Macintyre Henry (1852-1929). As a combined work it has quality stonework detailing, an unusual plan shape and a fine galleried interior.

Pilkington was a prominent Edinburgh based Gothic architect who carried out a broad spectrum of work over his career including churches, villas, schools and tenements. He was known for ambitious idiosyncratic designs with fine stone detailing and polychrome stonework, as illustrated by the Innerleithen Parish Church. The main elements to survive of Pilkington's design are the East elevation, the battered base course and the lower walls with Venetian Gothic windows. Pilkington's original plan layout was an elongated octagon, but this was lost when MacIntyre introduced a new square chancel at the west end to house the new organ, and replaced the octagonal plan sides with double gables. Macintyre reused Pilkington's stone detailing in his reconstruction such as the quatrefoil gableted dormers. Internally much of the structure dates from Macintyre's reconstructions; he introduced the west chancel with its red sandstone arch, the double vaulted transepts and the new exposed timber roof structure. New columns support the galleries; only two stone originals with carved capitals remain. The octagonal tower was added in 1920. A photograph in Robb and Stevenson shows the church in its original condition as built by Pilkington with a tall central ridge spire. The church was built by local master mason Robert Mathison, as were most of the churches in Innerleithen. The adjacent church hall was built by James Macintrye Henry in 1887.