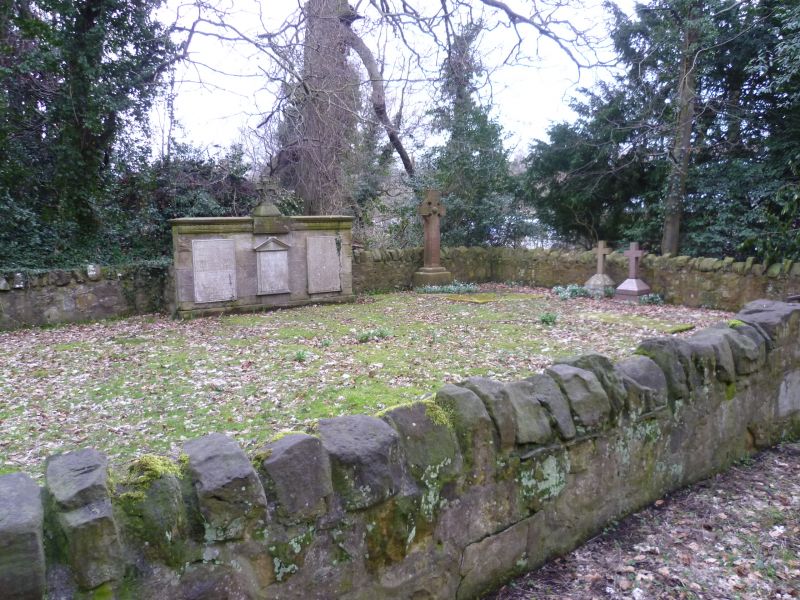 1705. Small square private burial ground for the Kerr family, the Marquesses of Lothian and the former owners of Newbattle Abbey. Sandstone rubble walls; ridged coping stones; designed gate decorated with the Lothian crest and sun, doves; initialled FWK and dated 1914 (Colonel Frederic Walter Kerr) who died near Ypres, 1914. Lothian Vault remains; large droved sandstone memorial with base; moulded cornice; waterleaf motif to frieze; bead and reel motif below; surmounted by cross; inscribed stone below; 'THE FRONT OF THIS ISLE WAS ENLARGED BY GENERAL LORD MARK KERR', 1888. 3 marble memorials set into the stone; corniced pediment to central slab; dedicated to members of the family including Mark Kerr who died 1589 and Jean, Marchioness of Lothian 'who built this Isle' in 1705. Other funerary monuments include red sandstone celtic cross, graveslabs carved with the Lothian sun motif and a stone slab marking the bones of a body found in the cloister garth, 1862 and reinterred in the Lothian burial ground, 1990.

A-Group with Newbattle Abbey, Newbattle Abbey Policies Fernery, Grotto and Ice House, Maiden Bridge, Monkland Wall, North and South Sundials, Port Lodge, Newbattle Road and Abbey Road Wall and Gatepiers, Lamb's Nursery, Archbishop Leighton's House, 1-5 Riverside Cottages, Old Bridge, Newmills Road, Dalkeith Lodge in Dalkeith Burgh and The King's Gate in Cockpen Parish. The burial ground stands on the spot of the original Newbattle Parish Church which was built here on the supposed site of the abbey's fish pond (J C Carrick) after the sacking of the Abbey Church; the Lothian vault being the only remains in situ. The church fell into disrepair circa 1720 and was resited in 1727 to its present location across the road.