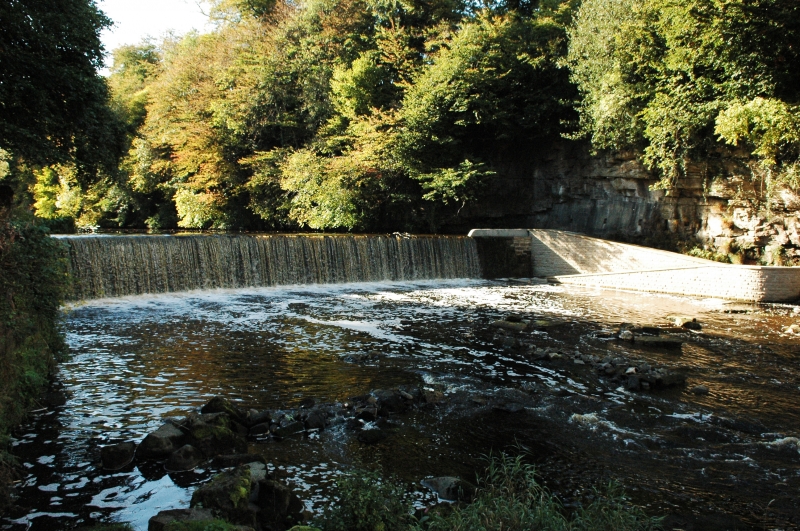 Circa 1790 in current form, partly reconstructed, 1935. Damheid in segmental curve creating drop of circa 10' and consequent waterfall. Roughly squared coursed rubble construction with broad and shallowly stepped fish ladder to W side, some stones missing from coping.

Fair-a-far was first noted to be in existence in 1676. It was originally a waulkmill and meal mill and still operated as such in 1759, when it was sold by the Smith and Wright Work Company of Leith to the Carron Company, and until after it was sold on again in 1770 to Sir William Cadell. It was one of four mills along the Almond at Cramond, the others being Dowie's, Peggie's and Cockle Mills. It is thought that its conversion for iron-making occurred in 1773 when the mill became the forge for the group of mills along the Almond at Cramond: the iron work used imported bar iron mostly from Russia and Sweden, and was not involved in smelting. It produced a great variety of objects such as plough socs, girdles and files. The weir appears to date from after 1787 (Ainslie map), and before 1839 (Carfrae map), and presumably during the mill group's heyday as iron mills from the 1770s to 1790s. The mill was previously served by a dam 100 yards upstream. At this time too a small tramway had been provided between Cockle Mill (downstream) and Fair-a-far. The mill was bought by a Mr Inglis in 1861, along with Cockle Mill, but had ceased operation by 1873 (Valuation Rolls). The large part of Fair-a-far mill was swept away by a flood in 1935: during the repairs the lead from the weir which had passed under the mill's E forge to rejoin the river downstream, was filled in. The Stewart engraving illustrates two wheels, that on the S gable thought to have been approximatley 13' in diameter with small cog wheel above, the other on the W side. The first edition OS map indicates the existence in 1853 of a wooden bridge by the weir and a sluice upstream.