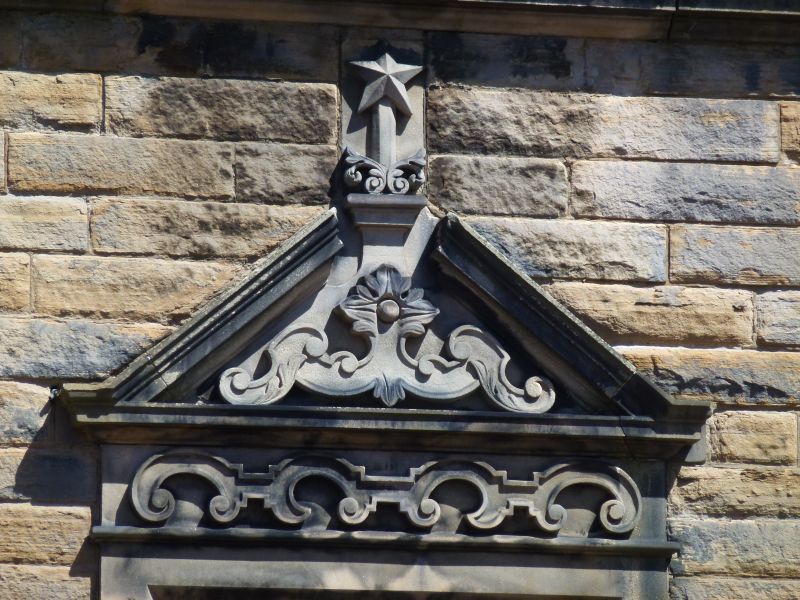 John Chesser, 1875; 1887 addition. 2-storey, 9-bay former school building, composed of 5 sections each one projecting further than the previous from left to right. Scots Neo-Jacobean. Basic L-plan when viewed from front; view from rear is T-plan. Highly distinctive central 3 bays with crocketted crowsteps to gable and tourelles, stone carved with school's name and architect in centre of gablehead, all windows have pediments with strapwork and stars and roses, carving of industrious putti at apex of scrolled pediment; 1 - storey projection to right (in re-entrant angle) with 'Junvenile' entrance and recessed 'Infants' entrance to left. Both doorways framed by Doric pilasters, with putti heads carved on the

entablature, supporting a broken pediment with a cartouche in the centre (composed of mask, scrolls, shield with hammer carving and crown at apex), the entrances are arched with the entwined initials GH (George Heriot) carved on the keystone. Base course; buckle quoins at arisses; string course at 1st floor; many windows crowned with pediments decorated with strapwork; star and rose motif recur frequently; stepped and shaped parapet to left hand range with Dutch gable that carries date stone; cupola, with weathervane, in centre of roof.

Heriot's School was commissioned by the Trustees of the Heriot's Trust in keeping with its philanthropic benefactor's wishes. George Heriot, the benefactor of the Heriot's Trust, was a goldsmith and jeweller for King James VI and Queen Anne. He died in 1624 and, after providing for his two illegitimate daughters and other relatives, he left the residue of this estate to the ministers of Edinburgh for the building and endowing of a 'Hospital and Seminarie of Orphans, for education, nursing and upbringing of youth'. On the 11th April 1659, George Heriot's Hospital admitted its first pupils. During the late 19th century the Trustees of Heriot's Trust embarked on other major buildings schemes, most of which were designed by the Trust's architect, John Chesser. These works included three schools: St Bernard's Primary School, Dean Street, which was erected between 1874 and 1877, and was subsequently extended by Robert Wilson in 1887; Regent Road School, London Road and Montrose Terrace, which was also begun in 1874 and received an extension by Robert Wilson in 1894; and Heriot's School, Davie Street, which was built in 1875 and had an extension added to the rear in 1887, which was presumably designed by Wilson too. All three schools share Scots Neo-Jacobean features including tourelles, buckle quoins, broken pediments and strapwork. The choice of style is unsurprising considering the date and design of the parent building on Lauriston Place. Another shared detail of the designs is the proliferation of stars and roses in the decoration of these buildings: the reason for the use of these motifs is that they were the emblems of George Heriot. Heriot's School was not the first school to be built on the Davie Street Site. The 1st Edition OS Map, of 1854, shows the site being used as the 'Lancasterian School'.