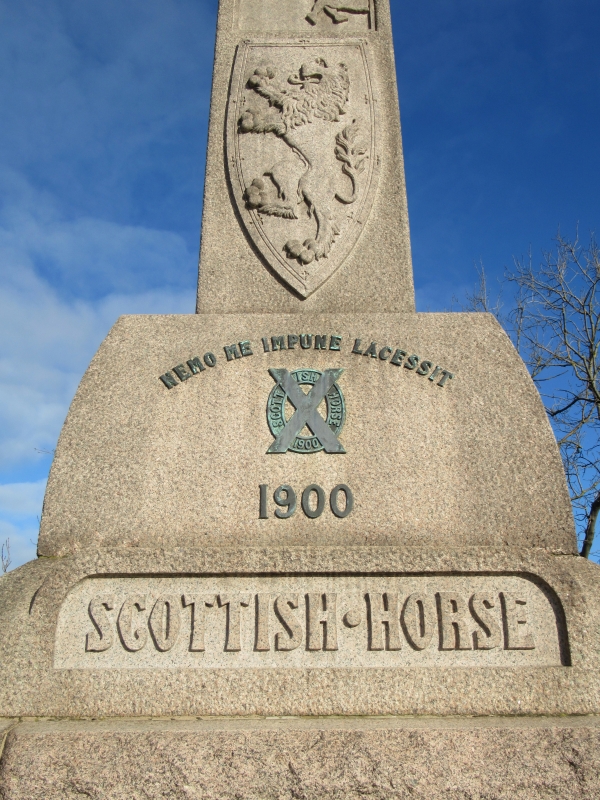 The memorial is a pink Peterhead granite Celtic cross carved with scrollwork on the south side of the shaft of the cross, to about two thirds of the way down. The bottom of the shaft is carved with a lion rampant on a shield. All carving is in low relief. Below the shaft are four stages, the third one being made up of four rusticated layers. Attached to this are three bronze panels listing fallen soldiers. The fourth stage is a base of large flat stones, their edges left rough. It commemorates the men who died in South Africa during the Boer War of 1899-1902. It was designed by Stewart McGlashan and Son and was unveiled in 1905.

In November 1900, Lord Kitchener sanctioned the raising of a regiment known as the Scottish Horse to help annexe the South African Republic and Orange Free State to the British Empire. Men were recruited from Scotland, Australia and South Africa and conducted a guerrilla campaign, launching night raids on their Boer counterparts. This memorial commemorates the men who fell during this campaign.

The memorial was designed by the firm of Stewart McGlashan and Son, an Edinburgh based firm of monumental sculptors. The firm produced a large number of monuments for Glasgow and Edinburgh cemeteries and was also responsible for a number of public monuments including the William Wallace Monument, (Robroyston, Glasgow) and the Robert the Bruce and Boer War memorial in Dunfermline Abbey.