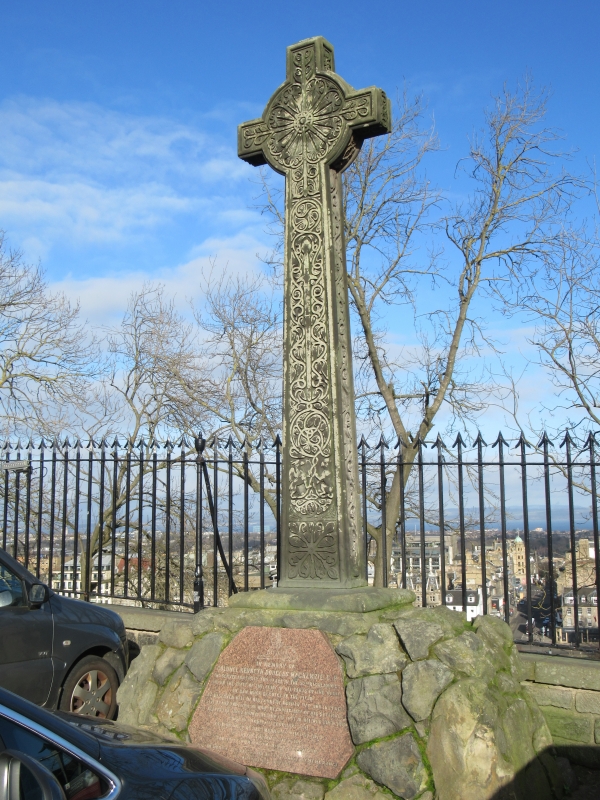 The monument is a sandstone cross of which commemorates Colonel Kenneth Mackenzie of The Gordon Highlanders. It was designed by the Victorian sculptor Sir John Steell in 1875. The cross is carved in Celtic design with stylized foliage on all four sides. Towards the base of the shaft on the north and south sides are mythical beasts. On the south are a winged goat (left side) and an unidentifiable creature (right side). On the north are a winged hare or rabbit (left side) and a cow like creature (right side). The cross stands on a rubble plinth with an inscribed pink granite plaque on its south side. The inscription reads 'IN MEMORY OF / COLONEL KENNETH DOUGLAS MACKENZIE, C.B. / WHO SERVED FOR FORTY TWO YEARS IN THE 92ND HIGHLANDERS / AND ON THE STAFF OF THE ARMY IN ALL PARTS OF THE WORLD. / HE SAW MUCH SERVICE IN THE FIELD / AND DESERVED WELL OF HIS COUNTRY, BOTH IN WAR AND IN PEACE. / ACTIVE, FRANK, AND LOYAL, HE WON THE CONFIDENCE OF HIS SUPERIORS, / THE RESPECT OF THOSE UNDER HIM AND THE LOVE OF ALL WHO KNEW HIM. / BORN AT DUNDEE 1ST FEBRUARY 1811. / DIED ON DUTY AT DARTMOOR 24TH AUGUST 1873. / HIS MOTTO THROUGH LIFE BEING / 'GODLINESS WITH CONTENTMENT IS GREAT GAIN!' / THIS MEMORIAL IS ERECTED IN AFFECTIONATE REMEMBRANCE / BY MANY OF HIS FRIENDS'.

Kenneth Mackenzie (1811–73) served in the British army for 42 years with The Gordon Highlanders. Much of that time was spent as a Quartermaster, responsible for ensuring that soldiers were well provisioned. He saw active service in the Crimean War, in the Indian Rebellion or Mutiny and in China. Mackenzie served also in Ireland where he captured the Irish nationalist William Smith after the Young Irelander Rebellion in 1848.

The sculptor was Sir John Steell (1804–91). During the1820s Steell was elected an associate of the Royal Institution for the Encouragement of the Fine Arts in Scotland and in 1829 he became a member of the Royal Scottish Academy. Steell's career was notable for both his own artistic achievements alongside the role which he played in the development of sculpture in his native Scotland. Steell is credited with introducing large-scale marble carving into Scotland. His works include the statue of the Duke of Wellington outside of Register House (Edinburgh) and the statue of Sir Walter Scott in the Scott Monument. This seated figure of Sir Walter Scott is stated to have been the first marble statue commissioned in Scotland from a native artist, although that by Steell of Professor Blaikie at Aberdeen was the first finished (1844).